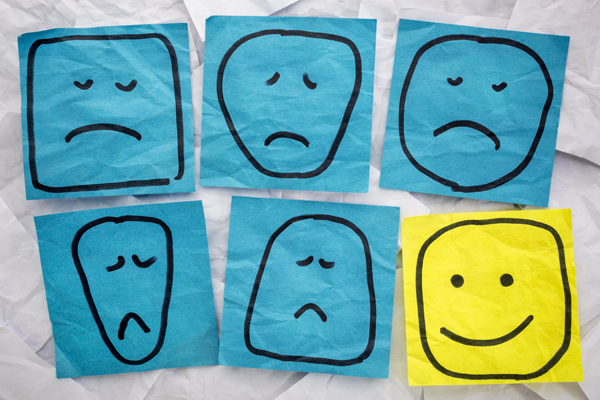 Robin Williams famously said, “Spring is nature’s way of saying, ‘Let’s Party!'”  And Aries is the sign that trumpets Spring, and embodies this natural surge into a new season.

On top of that, Aries is a fire sign, the element (with Leo and Sagittarius) that is less likely to get depressed than other signs.  The reason is natural momentum, and with Aries, the renown ability to make a new start.

What brings Aries down?  And what are some of the possible causes?

Aries suffers more than most, in a job without physical movement.  Consider how many jobs now involve sitting in front of a computer.  And then how much leisure time is also spent being physically inert (watching TV or surfing the ‘net).

If it’s ongoing, Aries becomes heavy in the body and stagnant, even falling into extremes of sloth.

The good news is Aries is quick to rally, like in a day, things can turn around.  A single bold (physical) action can be the spark that brings you back to life.

Lack of Inspiration and Challenge

An uninspired Aries is in shadowy territory.  The aggressive energy that could go into pursuit of a dream, can be diverted to aggravating others.  Read more about the Dark Side of Aries.

And that can become a negativity loop that keeps Aries in the role of instigator.  If you’re suffering from ennui, you might look to those around you for stimulation.  And that’s when the Aries energy
can be relentless, and even destructive, as it’s seeking to create heat, or get a rise out of someone.

Aries is more outward directed than other signs, but a remedy is not usually found in clashes with others.  A power move is to seek challenges that can be a focus for your directed energy.

Aries can be driven mad when constantly taken out of the moment.

Like when air signs talk everything to death.  Or earth signs consider every realistic factor before making a move.  Or water signs put out their fire with heavy emotions or manipulative behaviors.

A remedy is to create situations and roles that fit your way of being.  It could help to really see what’s making you feel bogged down — perhaps it’s simply a feeling of not being free.

Aries shines in the moment, and suffers when the fear of that creative edge causes others to exert control, like with too much pre-planning.

An Aries child that grows up with helo-parents, for example, can feel closed in, or cut off from natural flow.  There’s also some conditioning to be part of a collective, and to blend in, which runs counter to the instinct of Aries to stand out.

The cosmos played a trick on me, as I wasn’t planning on relating personally to the Aries way of depression.  But I read something in astrologer Kathy Rose’s article on Aries Energy and Women that brought back my own lonely years of desperate struggle with bulimia.

Kathy Rose writes, “Interestingly, quite a few of the women I interviewed who repressed the Aries assertiveness had allowed it instead to manifest as an eating disorder or other compulsion or addiction.”

She continues, “Eventually, when the energy is repressed long enough, and too much heat builds, the lava comes bursting forth. The result is an out-of-control, ugly explosion that usually receives very negative feedback – which then reinforces the urge to stuff it; and then the cycle repeats and the inner heat builds up again.”

That’s exactly how I felt when I struggled with an eating disorder in my teens, up to starting college.  So the funny thing is, my Saturn is in Aries and in the First House of self-image, and meeting the world.  Saturn is blocks, and here, it’s a cap on intensity.  With Saturn in the First House, I got judged harshly (with physical abuse) when I showed that Aries boldness of spirit.

And so began the holding back and the inability to trust my instincts.  But the intensity does build, as Aries is not an energy to stay dormant for too long.  The fear of the explosion mentioned above, was a driver of the behaviors (of bulimia), which are, it seems a need to have a catharsis for intensity.

What’s coming to light now, is that there was despair at being blocked from living life.  And with the years passing, seeing that gap widening, as the path of natural growth had been disrupted.  I felt that acutely, though couldn’t tell anyone, as it was my guarded secret (of course others knew).

When you’re depressed, you’ve got the sense of being isolated from others, cut off from life in some profound way.  The willfulness of Aries can add an edge to that, where others are almost afraid to try to help you.

Kathy Rose shares a quote from astrologer Barbara Ybarra, “It’s the anger that people don’t appreciate, and hidden anger is hard to get rid of.  I think feminine fire energy can be appreciated, but we very rarely see it in its purest form.  We see it when it has to come out, hell or high water…and by that time it is anger.”

It seems that depression is often something that builds slowly, until it’s a “thing” that has set in, and has to be slowly unpacked.

And with Aries, a pathway out is to track what’s alive, vital and inspiring.  And to take a small spontaneous action that can lead to another, and so on….