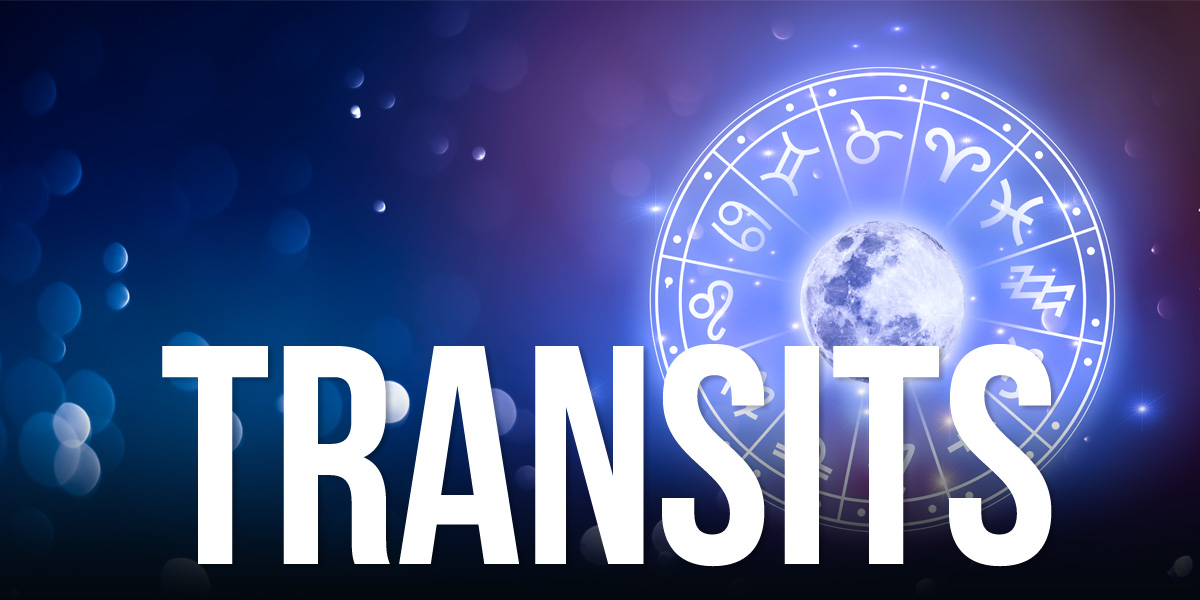 Astrological transits are one of the main means used in horoscopic astrology to forecast future trends and developments (the other means used is astrological progression, which progresses the horoscope forward in time according to set methods). As its name implies, astrological transits involve a method of interpreting the ongoing movement of the planets as they transit the horoscope. This is most often done for the birth or Natal Chart of a particular individual. Particular attention is paid to changes of sign, or house, and to the aspects or angles the transiting planets make with the natal chart.

Astrological transits are a part of what is usually called predictive astrology, the claim of astrology to predict or forecast future trends and developments. Most astrologers nowadays regard the term ‘prediction’ as something of a misnomer, as modern astrology does not claim to directly predict future events as such. Instead it is claimed that an astrological pattern with regard to the future can correspond with any one of a variety of possibilities. What is in fact foretold is the trend of circumstances and the nature of the individual’s reaction to the situation. In other words, progressed and transiting movements of the planets indicate phases in the individual’s life when the potential shown in the natal chart will be given opportunities for development, whether through favourable or unfavourable circumstances.

In addition all modern astrologers stress the role of free will. It is asserted that astrology does not reveal fate or patterns which are ‘written in stone’, rather it reveals a person’s strengths and weakness, talents and opportunities. The horoscope does not determine the future, but shows the possible paths that lie ahead so that the individual can choose between them. Modern astrologers argue that no planetary aspect brings a fate that cannot be counteracted in some way and some benefit derived from it – what actual events happen are largely dependent upon the freedom of choice of the individual. The role of the astrologer is to create self-knowledge and awareness of the movement of the planets and their meaning, so as to give the individual an improved ability to make reasoned and sensible life choices. In short, no modern astrologer would try to predict actual future events, or claim that the future was mapped out and determined.

Skeptics of astrology argue in response that stressing the role of vague, general trends and developments allows astrologers to avoid making verifiable predictions; and gives them the ability to attach significance to any number of arbitrary and unrelated events in a way that suits their purpose.

Transits of the personal planets – Sun, Moon, Mercury, Venus and Mars – are usually not considered as important because they move so quickly through the zodiac. The transits of the slower moving planets – Jupiter, Saturn, Uranus, Neptune, and Pluto – are more powerful and noticeable, especially when they hit a personal planet or cardinal point.

Transits of the inner planets (including sun and moon) are generally not considered by astrologers to be of major importance, as they are of such short duration, and so have a limited effect. Most astrologers would not chart these transits on an ongoing basis as they occur so frequently and are so fleeting in their operation. The following are their main characteristics:

The transits of the outer planets are considered to be the most important by astrologers, as their effects can last for up to several years. The following are their main characteristics:

The retrograde motion of a planet is its apparent backward motion through the sky caused by the Earth travelling past a slower-moving outer planet, or when the Earth is itself passed by a faster-moving inner planet. The outer planets are retrograde for over 40% of the time. In astrology, this backward movement was traditionally thought to be unlucky or inauspicious, as it went against the ‘natural’ order of movement (or ‘direct movement’ as it is known).

Most modern astrologers consider the retrograde movement of a planet to be malefic, indicative of stress or difficulty. For example, the retrograde movement of Mercury is commonly thought to signify difficulties in communication, such as post or emails going astray, verbal misunderstandings, and travel delays and frustrations. Some astrologers however, do not regard the change from direct to retrograde motion as automatically being one to repression and limitation (nor the reverse sudden release). Rather a change in either direction of movement is regarded by them as simply indicating a shift in a person’s handling of that part of their life.

A transiting planet may pass over a particular spot in a natal chart and then turn retrograde, passing over the same spot again before it then goes ‘direct’ again, passing over the spot for a third time. This can bring a prolonged period of change into the person’s life.

The planetary return in astrology is when the transiting planet returns to the precise position it was in at the moment of a person’s birth. Symbolically this means that the planet is beginning a new cycle in a person’s life. Returns apply also to the sun and moon – an astrologer would say that a person’s birthday is technically their ‘solar return’; for it marks the day when the sun returns to the same position in the zodiac as on a person’s original birthday. The most important returns are those of the outer planets Jupiter, Saturn and Uranus. Half-returns (when the planet reaches the halfway point in its journey) are also important, especially in the case of Uranus, as many people may not live long enough to see or get the full benefit of its full return of 84 years.

Jupiter returns occur every twelve years or so, and indicate a new phase of growth and development in life. The first Jupiter return, at around age twelve, concerns the move into adolescence and puberty; while the second return at around age 24 concerns the first real moves into the adult world. The year of a Jupiter return will usually be a good one, with prizes won and grants awarded. Writers are often first published in this year, and sports people achieve their first important goals. Foreign travel and higher study are often indicated. The Jupiter return is the ideal time to push forward and be assertive, as efforts will usually be well rewarded.

Saturn returns occur approximately every thirty years and indicate a phase in the aging process when new realities and responsibilities must be faced. The first Saturn return occurs at around age thirty and concerns the time when the first real responsibilities are felt. Many people will make a serious commitment at this time, perhaps to (or from a) marriage, starting a family or buying a home. It is also a time when many assess relationships that have failed and realise that it is time to end them. As regards work, many will reassess their career and question their progress to date. This can be a good time to change direction and retrain, even at the cost of a lower salary for a while.

The second return occurs at around age fifty nine and concerns the time when people reassess the next phase of their lives. Many people begin to consider retiring from full-time work and developing interests that have been neglected because of career and children. It is also the first time that many have to face the reality of approaching old age. It is important to have a constructive, practical attitude at this time, and not simply regard oneself as being ‘on the scrapheap’, as for most people there are still many good years ahead. The Saturn return is often a difficult and challenging time, but decisions taken and changes made usually work out well in the long term if they are sensible and followed through with.

Uranus takes about 84 years to complete a full return. However, one of its most important influences is felt when it reaches the halfway stage in its journey, at around age 42. The Uranus half-return is the origin of what for many people is the ‘mid-life crisis’. Women, especially those with children growing up and leaving home, may feel that life has passed them by. A lot of women also begin the pre-menopause stage at this time, and many men experience the ‘male menopause’. Permanent and successful long-term relationships may be unsettled or disrupted by casual flirtations and affairs. The Uranus half-return can be stressful and tense, but also energising. It is the ideal time for people to break out of routine lifestyles that they have been stuck in for years, and develop new interests.

The full Uranus return takes place around age 84, and if the person is reasonably well and fit, it can herald a new and lively interest in life. For example, many creative people have completed great works after the age of 84 – Verdi composed his opera Falstaff, and Picasso painted many of his finest paintings late in life.