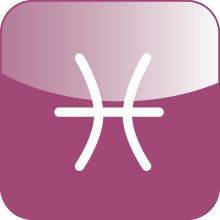 To know you is to love you, Pisces—but with Neptune in your sign, it’s been a little harder to figure you out. And with Jupiter square Neptune all year (January 13, June 16, and September 21), your mystique is only growing in 2019!

Jupiter in Sagittarius raises your profile, and his two conjunctions with Venus (January 22 and November 24) mean that most of the attention is positive. But this can be at odds with how you see yourself—especially if Neptune’s clouding your vision.

Fortunately, Mercury spends two months in your sign this year (February 10-April 16, retrograde March 5-28), giving you plenty of time to see yourself more clearly… and compassionately.

Self-awareness is key in May and June, when Gemini planets activate the Jupiter-Neptune square. Between your private life and your public persona, there’s some sort of disconnect—and it’s up to you to bridge the gap.

After all, your circumstances are shifting this year… so like it or not, you’ll have to shift along with them. With Uranus moving into Taurus on March 6 (and staying until 2026), “fish-out-of-water” situations could become your new normal.

But there’s nothing to fear… even if Mercury’s deep dive into Scorpio (October 3-December 9) has you wondering who or what to trust. With Mercury trine Neptune, it’s easy to get a little paranoid—just make sure to examine your own motives as much as you question other people’s.

You promised yourself you’d never “sell out.” And Pisces, we know your intentions are pure. But even if conventional measures of success don’t carry much weight, sometimes you’ve still got to play the game. And with Saturn, Pluto, and the South Node in ambitious Capricorn, there’s no way around it: this year, you’ve got to be in it to win it!

Discipline and hard work are the real keys to success—but it also helps to know the right people. And two solar eclipses in Capricorn (January 5 and December 25) can put you in touch with them. So put your best foot forward, Pisces… your vibe attracts your tribe!

So what’s standing between you and romance? Shyness may have something to do with it—but with the North Node in Cancer all year, there’ll be plenty of enticements to come out of your shell. You may feel awkward showing your softer side, but trust us, vulnerable is sexy in 2019.

If that’s not enough of a confidence booster, just wait for the summer, when two Mercury-Mars conjunctions embolden you to express your true feelings and go for your heart’s desire. The Cancer conjunction on June 18 opposes retrograde Saturn and Pluto in Capricorn, but don’t let fear of rejection hold you back—you’ve got way too much to offer!

You’ll get a second chance when Mercury backtracks into Cancer, July 19-August 11. But choose your words carefully, because with Mercury retrograde for most of July, feelings will be a little fragile. If misunderstandings arise, try not to overreact… or go to bed angry. Own up to hurt feelings, and at least give the other person a chance to make it better.

Relationships require attention around the Virgo new moon on August 30, with five planets in your opposite sign (including a Venus-Mars conjunction, exact on the twenty-fourth). These Virgo planets activate the Jupiter-Neptune square, putting your own self-image and goals at odds with a partner’s expectations.

Fortunately, the Virgo stellium also forms a Grand Earth Trine with Uranus, Saturn, and Pluto. Relationships can bring out the best in you—as long as you’re both keeping it real. Love each other, not just for who you could be, but for who you are.

After all, Pisces, as much as you may look to a partner to “balance you out,” you can’t depend on them for everything—that’s way too much pressure!

And you’ll be more aware of this from late September through early November, when planets in Libra square Saturn and Pluto. But don’t despair—if your partner doesn’t share all your interests, try reaching out to some like-minded friends. Socializing with other people, both separately and together, can only make you stronger!

Follow the money, or follow your bliss? Lucky for you, Pisces, this year you won’t have to choose.

With Jupiter and Venus meeting up in your career house (January 22 and November 24), good things are coming your way… and you’ve earned every single one of them! After all, dreamers like you aren’t always encouraged to succeed—but you’ve kept the faith and kept your eye on the prize.

Still, with Jupiter in Sagittarius square Neptune in your sign (January 13, June 16, and September 21), try not to indulge in too much magical thinking. We love vision boards and affirmations too—but at the end of the day, Pisces, there’s no substitute for hard work.

Fortunately, whether it’s your main gig or a side hustle, you’re deeply devoted to practicing your craft. Over the last two years, a series of eclipses in Leo has cleared away the obstacles that kept you from pursuing it—and by the last one on January 20, nothing’s standing in your way. Mercury visits Leo twice this summer (June 26-July 19 and August 11-29), making it a great time to overcome your insecurities and let your work speak for itself.

Over the last seven years, Uranus in Aries has brought a lot of financial ups and downs. And the beginning of 2019 can find you still in “fight or flight” mode—especially between January 21 and February 1, when Mars in Aries squares Saturn and Pluto in Capricorn.

Fortunately, after Mars’ conjunction with Uranus in the last degree of Aries (February 12) and Uranus’ entry into Taurus (March 6), there’ll be fewer financial fires to put out—and you can afford to take a more methodical approach to money management. It’s time to look at the big picture, Pisces, and start investing in the future!

Learn Even More About Pisces!

Moon is traveling through Aries today. Watch your head, but do jump in. It's time to conquer.