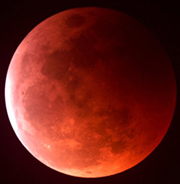 In the Earth’s Shadow

The Full Moon is always the alignment of the Sun and Moon in opposite Zodiac signs. The lunar eclipse happens when the Earth is smack dab in the middle, altering how the Moon reflects the solar light. Eclipses come in pairs, and usually come every six months, as that’s when the Moon’s orbit hits the ecliptic.

There’s a mysterious, underworld quality to the lunar eclipse. The Moon turns orangey or blood red, because of the shorter wavelengths being filtered through the Earth’s atmosphere. This frightened people in earlier times, as the cool lunar surface turned a malevolent red. Some cultures believed the Moon was swallowed by a three-legged toad (China) or a jaguar (Maya), and was a herald of demonic or destructive energies afoot. They shouted, clanged pots and pans, and banged drums to dispel the dark spirits lurking around.

What does it bring? Since full Moon’s are a time of illumination, the lunar eclipse momentarily throws up shadows of darkness. And often it’s the shadows of the “unlived life,” buried potential, being brought to the surface. It’s a bit like the rich void of the New Moon, where you’re in touch with a well of psychic material. It can be disorienting, as your feet are often leaving the ground of the known!

If you’ve been living in a fantasy world, you’re knocked back to earth. It can be destabilizing and rock the foundations. You are forced to be fully present to some event. You may get shattering news. It takes awhile to fully understand what’s happening, and to find your footing again. Sometimes the events of the eclipse are worked out over a long period, say six months.

Full Moons are times of super high energy, and surging emotion across the spectrum. The eclipse intensifies the sense of being overwhelmed, and events are experienced in vivid color. You’ll get this hit in the house in which the eclipse is taking place. It also loosens the moorings of any planet it touches. You’re in the rapid transformation chute, and clues to how it’ll manifest come from the Zodiac sign of the Sun and Moon at the time. Eclipses liberate us from the status quo, and get things moving. It’s a time to trust, though the outcome may be uncertain, that all things work toward progress in the end.