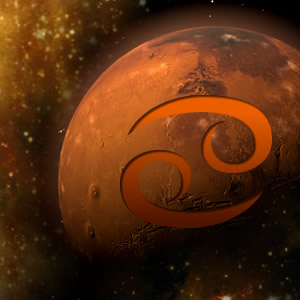 The warrior planet loses its edge in cuddly Cancer

Assertive Mars will meet some significant challenges when it moves into the sensitive water sign of Cancer from July 13 to August 27, 2013.

The warrior planet prefers to charge ahead, acting on its own instincts, rather than weighing the consequences of its actions. Cancer, however, tends to blunt Mars’ pointed thrust. This nurturing sign is about protection and security, so impulsive Mars may be forced to slow down and move more carefully at this time.

An asset of this period is the ability to blend martian initiative with Cancerian concerns for preservation. This can be ideal for carefully building new structures that honor and acknowledge their connection to the past and to traditional values. The urge to move forward, then, does not cut us off from familiar patterns, but includes them to make for a gentler and more comfortable step into the future.

Cancer is like a river that moves forward, but can also turn back upon itself. This represents the reference to internal processes or feelings that are essential to this sign. Mars in Cancer can successfully combine the yang force of initiative with this awareness of subjective needs to balance action with reaction and create gentler models for progress.

The downside of this combination is defensiveness. If Mars does not have new paths to blaze, it can easily retreat to a position of vulnerability and insecurity. Overt aggression may not result, but grumpy behavior and moodiness are possible. One can easily play the victim, if that’s a familiar pattern. Nations and other organizations may circle their wagons against their perceived attackers. However, creation of circles of careful initiative that blend the best of the old and the new can be highly successful at this time.

Country music singers Naomi Judd, Dolly Parton and Tammy (“Stand By Your Man”) Wynette were all born with Mars in Cancer, as was basketball coach Phil Jackson. Having Mars in Cancer doesn’t mean that you can’t be aggressive (Sandra Bernhard, Jerry Rubin, Gary Payton) or scary (Stephen King, Gene Simmons).

JZ Knight (Ramtha) and Jane Roberts (Seth) are women born with Mars in Cancer who psychically channel male entities. General Norman Schwarzkopf expressed his Mars in Cancer in the military, director George Lucas through his films and George Stephanopoulos in the political arena.

Two of Astrology’s greatest researchers, Michel Gauquelin and Dr. Eugen Jonas, were born with Mars in Cancer. They were both pioneers (Mars) delving into the origins (Cancer) of our oldest system for understanding human behavior and natural cycles.