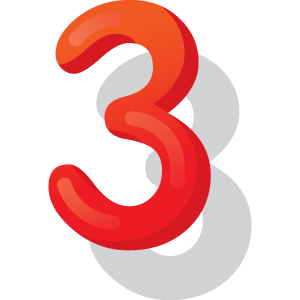 Universal meanings: the number of time and fate — past, present, future. The number of the family — father, mother, child. Birth, life, death. Heaven, earth, hell. Trinities generally. Creation and procreation representing both spiritual and sexual creative power. The answer to the conflict posed by One (male) and Two (female). The World on the Seventh Day.

Personal Meanings: Threes are ambitious, dislike being in subordinate positions and always ensure that they are one jump ahead of everyone else. They have a strong desire to rise in the world and usually achieve this because they are shrewd, original, observant and willing to work hard. They are prepared to take orders, but dislike doing so, and when giving orders themselves can often be dictatorial. Threes are extremely lucky people and even misfortunes have a habit of working out well for them in the end. They are versatile, clever, satirical and able to outwit ponderous, slow-thinking people with ease.

Negative Threes can often be too outspoken and are easily angered if they suspect that anyone is taking advantage of them. They can also be sycophantic and insincere, wasteful and frivolous. The number three when connected with future events promises luck and gives the go ahead for any proposed schemes. In personal life Threes are neither jealous nor possessive. They are generous, impulsive, warm and loyal. They are extremely good company, witty, entertaining and fun to be with. However, once a Three has decided that a relationship is over he or she will end it without further ado.

The number three has always been regarded as the sublime number and this is evident in the Greek word ‘Trismegistos’ which means thrice greatest or eminently great. To the Pythagoreans it was the number of excellence because it has not only a beginning but also a middle and an end. Spells are often repeated three times, fairy stories are full of instances of the number three in the form of wishes, guesses or riddles and, in mythology, Neptune carried a triple-pronged staff. The Delphic Oracle held the tripod in great esteem.