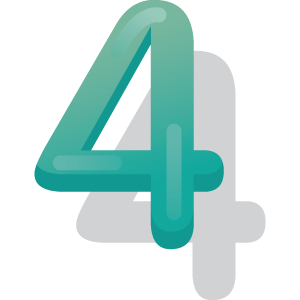 Symbols: Uranus, the Tarot suits which correspond in Celtic legend to the Unconquerable Sword, the Magic Spear, the Cup from which an entire army could be sustained and the Stone of Destiny. Also the Menorah (Candelabrum), Aaron’s rod, the stone tablets of the Law and the Urn that held the Manna from Heaven.

Sign: the Square, and by implication the Cube and the Tesseract.

Universal meanings: the world, the Earth, the Establishment, the number of foundation and solid matter. The points of the compass, the seasons, the elements (earth, air, fire and water), the winds. A ‘safe’ feminine number. A sacred number of the Pythagoreans representing completion, solidity, stability and equilibrium. Four is not an inspiring number and is sometimes referred to as the most primitive among numbers. Four points are needed to construct the tetrahedron. There are four aspects of self: physical body, astral body, soul and spirit. Four functions: sensation, feeling, logical thought and intuition. Four aspects of matter: mineral, gaseous, animal and vegetable.

Personal meanings: Fours are builders. They are life’s organizers. They are efficient, industrious and extremely practical. They are often considered to be rather dull because they are so down to earth, stolid and respectable. Fours are also absolutely trustworthy, tenacious, precise and calm. They seldom allow anything to upset them and deal with their problems both carefully and systematically. Negative Fours can be slow-witted and very boring. Also stubborn, weak and careless. They develop repressive natures and become suspicious of everything and of everyone. Bouts of severe depression are not uncommon in a negative Four. The number four when connected with future events indicates a time to slow down and take life more seriously. It can also mean a period of hard work with little or no spare time for leisure activites. In personal life, Fours are homelovers. They manage their financial affairs well and never live beyond their means. They also have many friends who often seek their advice. Fours are devoted to their partners and would go to any lengths to make them happy. They are thoughtful, considerate and faithful.