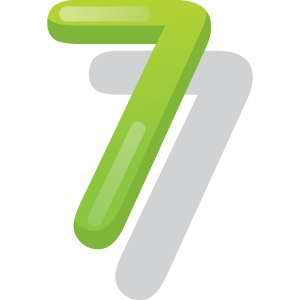 Universal meanings: the Magic Number which rules occult mysteries, magical ceremonies and clairvoyance. It is a sacred and mystic number in almost all societies including Hindu, Egyptian, Greek, Hebrew and Chinese. Seven stands for the mysterious ‘God force’ in Nature. It is an indivisible number and therefore compared to God. Seven is also the only number capable of  dividing ‘the number of Eternity’ and continuing in itself for as long as the number representing Eternity exists, and yet capable, at every addition of itself, of producing the number nine. This means it produces the basic numbers that all material calculations are built upon and which man depends upon and through which thought is expressed. On the Seventh Day God rested and all things rest under the influence of the number seven because they need time to reflect and contemplate. It represents the last step before Completion and is closely associated with man’s life span of three score years and ten. The eighth step completes the cycle with death and the unknown.

Seven is the number which governs the rhythms of life. In antiquity there were seven planets which had an influence upon events on earth and which are also linked with the seven days of the week. The Moon, the planet which has the greatest influence upon the rhythms of our lives, has a four-phased cycle (a lunar month). Each phase lasts seven days — our week.

Seven occurs frequently in the Bible, when it is often associated with magical powers. Other recurrences of the number seven are the seven colours in the spectrum, seven notes in the musical scale, seven features on the human head, seven vowels in the Greek alphabet, seven principles in man. The seventh son of a seventh son is believed to have occult powers.

Seven is very closely linked with the development of a human child from the moment of birth to almost two-and-a-half years old, a discovery made by Dr. Wynn Westcott. The seventh hour after birth will decide whether the child will live or die. On the seventh day the remainder of the umbilical cord comes off and on the 14th day (2×7=14) the child’s eyes follow a light. By the 21st day the baby is able to turn its head (3×7=21) and by seven months it begins to get its teeth. At fourteen months old (2×7=14) it should be able to sit steadily and by twenty-one months old (3×7=21) it should have begun to speak. Finally at twenty-eight months (4×7=28) the child should be walking strongly.

This number represents the triumph of spirit over matter, the union of three plus four, of heaven and earth and of life and substance. The Great Bear pointing to the one fixed star (sometimes called the pivot of the Universe) is a celestial manifestation of the fundamental truth of the number seven.

Seven occurs frequently in Nature. Flowering plants of a pure strain have seven outside petals. These are plants which have never been cross-pollinated with other plants, either intentionally or unintentionally, and which are becoming increasingly more difficult to find. The Lotus is one such pure type which never loses its individuality. Buddah is often represented sitting in the centre of a Lotus flower — the emblem of the religion he taught. He chose the Lotus because its seven petals, always clearly visible, represent his teachings. He believed that the creative spirit was the origin and foundation of all things and that the seven petals represent the creative action of the seven planets from which all religions have had their origins.

Personal meanings: Sevens are deeply interested in all aspects of mysticism and the occult. They are often clairvoyant and/or gifted with powers of extra¬sensory perception. Usually they have fantastic dreams. They are solitary people who need to spend a great deal of time alone to meditate and think. Some Sevens become so wrapped up in their thoughts that they become dreamy and impractical and tend to live in a fantasy world of their own. Their ideas about religion are often unorthodox and occasionally they create religions of their own based on mystical beliefs. Sevens are highly intuitive and imaginative — this is the number of poets, philosophers and scholars.

They need to achieve a degree of success and recognition in order to fulfil themselves or they become frustrated and are bitterly disappointed with life. Sevens love to travel because the constantly changing scene appeals to their restless natures and gives them the opportunity to experience different cultures and life-styles first-hand.

Negative Sevens can be depressive or moody while others are aloof, sarcastic and inclined to be lazy. Occasionally they become totally confused and rambling in their speech.

The number seven when connected with future events implies self- deception. Emotionally this will be a testing period in life and financially not a time to enter into any new agreements. You must learn to face the facts and take responsibility for your actions both in the past, now and in the future.

In personal life, Sevens are passionate people with great depth of feeling. They are understanding, good-natured and sincere in all they say and do. They have little or no money sense and often live beyond their means much to the horror and annoyance of their partners. They are magnetic and very individual people.