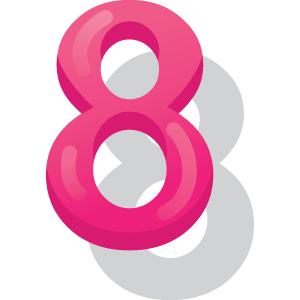 Symbols: Saturn, Demeter, the Caduceus, the figure of Justice with a sword pointing upwards and a balance in her left hand (the symbol of human justice).

Universal meanings: the number of material success and worldly involvement. It has four-fold balance because when halved its parts are equal (4 and 4) and when halved again they are still equal (2 and 2, 2 and 2). The Greeks called it the number of justice because of its equal divisions of equally even numbers. It represents the solid and the complete. Eight represents cycles of time — the four seasons sub-divided once more by the two solstices and equinoxes. In Christian symbolism it stands for the afterlife. It is the number of regeneration and of the Gods who accompanied Thoth. The figure eight is believed to represent the joining of the two spheres of heaven and earth. It is the number of the force which exists between terrestial order (the square) and external order (the circle). Associated with the Serpents of the Caduceus, the balancing of forces, the equilibrium of different forms of power and with infinity (the mathematical symbol for which is an eight on its side). Eight also has a dual nature (evident from the figure itself — one circle on top of another) and sometimes stands for degeneration and regeneration. Complete reversals are always a possibility with this number.

Personal meanings: This is the number of struggle, tenacity and materialism. Eights are either great successes or great failures, they have no shades of grey and their failures can be just as spectacular as their successes. They are ardent, zealous and have the ability to see matters in broad terms. These qualities give them the ambition and drive to aim for material goals which they often achieve.

This is not a fortunate personal number and people who possess it are often required to face sorrows, losses and humiliations during their lifetimes. Their motives are also often misunderstood and some Eights experience great loneliness. However, when their strong individuality and deep, intense nature is coupled with a relentless application to work they are often able to establish themselves in positions of authority and power. They are wise, adaptable, tenacious and exceptionally tough characters.

Negative Eights can be ruthless, obstinate and unscrupulous in their lives. Some appear to be haughty while others become the guilt-ridden playthings of Fate with tragedy woven into their Destiny. The number eight when connected with future events indicates a period to take great steps forward but only for those who are prepared to work hard and accept responsibility. Anyone contemplating marriage should consider this move very carefully and pay special attention to their financial security.

In personal life Eights can become eaten up with jealousy and demand constant reassurances of fidelity. They often experience difficulty in expressing their affections but prove to be loyal and devoted partners, albeit undemonstrative. Eights are not the easiest of people to live with as they regard quarrels as a normal component of everyday life. They are people who experience great extremes of emotion — sometimes offhand and detached while at others gentle, kind and understanding.