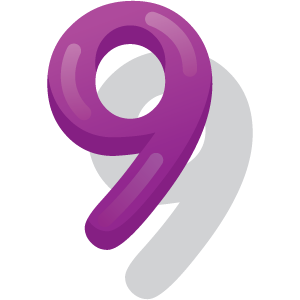 Universal meanings: the last and greatest of the series of numbers 1 to 9 which are the root of all things. The Hebrew system of numbering does not assign any letters to the number nine. In their mythology it was associated with finality and there are no Hebrew letter sounds which correspond with the idea of finality or totality. They believed that nothing could ever be truly final and that only God could be complete, lacking in nothing and perfect. The triad of triads and therefore a number of great power which is frequently associated with the occult. Also associated with triple synthesis or disposition on the corporal, intellectual and spiritual levels simultaneously. The greatest of all primary numbers because it contains the qualities of all the others. It reduplicates the creative power of three and stands for completeness. When multiplied by any other number, the sum of the digits making up the final number is always nine, e.g. 5×9 = 45 (4 + 5 = 9), 7×9 = 63 (6 + 3 = 9), 9×9=81 (8 + 1 = 9) which signifies a tendency towards egotism. Nine is the pinnacle of mental and spiritual attainment. A masculine number and the number of consciousness and psychism.

Nine represents the eight steps around the cycle of life plus the still centre. The Egyptians saw the still centre as Ra, Lord and Ruler of the Nine Gods at Anu. There are nine Muses who may number in accord with the nine months of pregnancy — a period of preparation for inner creative work. It represents man and everything to do with the physical and material plane. An emblem of matter. In Freemasonry there is an order of ‘Nine Elected Knights’ who include nine roses, nine lights and nine knocks in their rituals.

Personal meanings: Nine is the highest of the single numbers and those ruled by it are courageous and selfless with a genuine regard for humanity. Nines are capable of great spiritual and/or mental achievement. Their greatest dangers lie in impulsiveness of word or action and many are accident prone. Under the strong rulership of Mars, Nines are fighters who pursue their ambitions with grit and determination. They often make many enemies during their struggle to the top. They are both inspired and inspiring. Some Nines are exceptionally gifted artistically while others are brilliant in other fields of endeavour. They are enterprising, imaginative and quick-thinking.

Negative Nines are impatient and often forget to think before they speak. They can also be uncharitable, intolerant and capable of deception. They resent criticism in any form and are conceited, self-opinionated bores.

When the number nine occurs in connection with future events it is interpreted as the end of a cycle and as a time to tidy up your affairs in preparation for the beginning of a whole new phase in your life. When it occurs in the context of relationships it has a slightly different meaning which is, quite simply, the end.

The private life of a Nine is often punctuated with quarrels and strife. Nines particularly rebel against any kind of interference whether from relatives, in¬laws or friends. They are, however, trusting and loyal and usually try hard to fit in with their partner’s wishes. Some crave affection and will do almost anything to get it even to the extent of making fools of themselves.