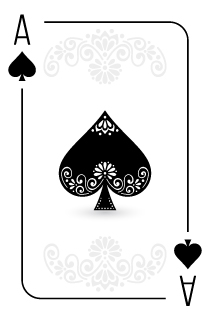 How to Read the Ace of  Spades:

Traditionally the Ace of Spades has gotten a bad rap similar to the common misconceptions regarding the Death card of Tarot. And like the true meaning of the Tarot Death card, the Ace of Spades symbolizes the changes and transformations associated with endings and new beginnings.

In rare cases the Ace of Spades can indicate physical death, but only in combination with other Spades. Some systems use a reversed position meaning for the Ace of Spades even though no reverse meanings are used for the other 51 cards in the deck. Traditionally, the reversed Ace of Spades symbolizes death.

Whereas the three other Aces in the deck represents new beginnings, the Ace of Spades can refer to endings, or possibly the beginning of trouble in a reading. Of course, endings are not always bad things, so the appearance of the Ace of Spades in a reading can indicate a “rebirth,” and can be regarded as an indirectly positive influence.  Because Spades symbolize “the mind,” a modern meaning of the Ace Spades refers to “what affects the mind” such as worry, fear, anxiety, decisions, etc.

The A♠ is the only card in the deck with a reversed meaning in my grandmother’s system. If the A♠ fell with the apex up, she would read it as “a troubled mind (or FEAR of death).” If it fell with the apex down, it indicated physical “death.”

In my own readings, I’ve dropped the reversed meaning, and read the A♠ as “worries, anxiety, a pending decision, etc.” Although in truth, I still wince a little when the reversed A♠ falls in a layout.

For the A♠ to indicate a physical death in my readings, it would have to be clustered with some of its more unsavory friends such as the 2♠ and the 5♠ or 6♠ along with either the 8♠ or 9♠ to indicate loss and grieving.