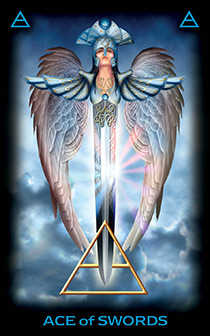 The Ace of Swords in Tarot stands for mental force, truth, justice, new ideas and plans, victory, and fortitude. The Ace of Swords meaning in a Tarot reading is one of difficulties being met with intelligence and clear thinking.

Upright Meaning: The upright meaning of the Ace is auspicious for every aspect of your life. In a spread, it overrules any negative minor arcana cards close by (just like the major arcana card XIX, The Sun). The Ace of Swords predicts new beginnings, decisions, and clear thinking and usually relates to work and love. It heralds action, drama, and sometimes confrontation. However the Ace of Swords manifests in your life, it will bring an immediate change to your circumstances—for the better.

As a prediction card, it shows that mental agility and assertiveness will bring success. The other cards around the Ace in a reading will guide you to nature of this conquest. Be cautious, though, not to be too zealous—judge the situation and be direct, rather than abrasive, mindful of how you would want to be treated if you were on the receiving end.

In relationships, it reveals triumph over past obstacles—you win through to your heart’s desire.

Reversed Meaning: When the Ace reverses, the card can predict conflict and arguments, and you may become involved in a hurtful battle of wills. The card can also predict a contest that you cannot win, at least at present. The message is to withdraw, tend your wounds, and turn your attentions elsewhere.

You may also lack confidence in your intellectual abilities just now and not feel equal to others—which is your perception, not the reality.

Another common meaning of the reversed Ace in readings is a decision going against you, such as failing a test or interview and, in more general terms, not being able to hold your ground under fire from more dominant personalities.