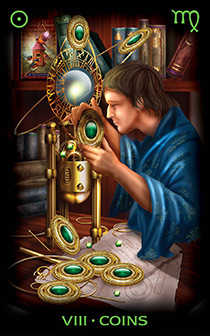 The Eight of Coins in Tarot stands for diligence, knowledge, and detail. The Eight of Coins meaning in a Tarot reading is hard work, attention to detail, and focus. The person on the card seems busy in a project that’s taking up all his attention. He has isolated himself to concentrate on the job at hand.

Upright Meaning: Money is on its way, often as a result of previous efforts or decisions rather than an unexpected bonus or gift. (Look to the Six or Ten of Pentacles for generosity and windfalls.) You may be offered an opportunity to gain new skills that will be profitable in the long term. You may also consider a new career direction or be working for promotion. In general, the card also reflects the need for a logical, diligent approach to your projects.

This card is often known as the apprentice. It comes up in readings to show education and gaining a qualification, particularly an undergraduate degree or diploma. The Eight of Pentacles also shows a personality aspect, so if it appears in the “you/situation” position in a spread, it reveals a hardworking, trustworthy, and dedicated individual who takes his or her responsibilities seriously.

Reversed Meaning: The reversed Eight of Pentacles can show that you’re feeling trapped. This may be because you’ve chosen an educational course that isn’t for you and doesn’t develop your particular talents or reflect your interests enough to be sustainable long term. In work, you may know you’re only doing the job for the money. While this may be acceptable on a short-term basis, long term it feels soul-destroying. While supporting yourself financially, it may be time to look elsewhere rather than let the situation continue.

As a prediction card, the Eight of Pentacles shows a cycle is about to come to an end, so rather than wait for this to happen, conserve your energy and direct it toward finding a new career. Don’t resign yourself to your present situation if there’s no sense of achievement or appreciation.