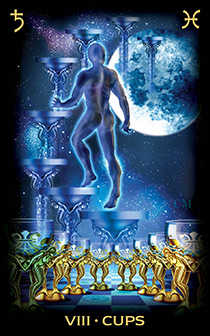 The Eight of Cups in Tarot stands for deeper meaning, moving on, and weariness. The figure on the card is a man leaving on a journey, striking out on a new path. The card means that change could come in many forms. It could be physical, such as a job change, relocation, or change in relationships. Change could also refer to inner changes, such as replacing older patterns of thought with new ones.

Upright Meaning: The upright Eight of Cups reveals a time of restlessness when it feels as if something is missing. Work and relationships may appear harmonious from the outside, but your intuition is nagging you. The result may be a departure. Traditionally, the Eight of Cups predicts you leave a situation or break an agreement that no longer gives you fulfillment. This should not be a hasty decision; only move on when you are sure that there is no more you can gain or contribute. When the timing is right, there’s also less drama than you would expect: Like the figure on the card slipping away in the night, you can take your leave quietly and swiftly. Naturally, you may feel sadness but little regret—provided the timing is right.

Like the figure in red following the path of the river, it’s now time to go with the flow. You’ll soon feel energized to move on to where your interests and curiosity call. You can also feel content with what you have achieved.

This card often turns up in a reading to show that you have already left a situation emotionally, and action will follow as you now take your actual leave. It can also predict a time to travel, to explore physically or through spiritual journeying.

Reversed Meaning: What are you holding on to? Take stock: Are you clinging in to the past when you really do know that your current living situation has to change? When reversed, the Eight of Cups shows errors of judgment, so you jump too soon or stay too long, unable to see that there’s an alternative way to do things. At this point, there’s no logical solution; like the Eight of Cups’ sphere of Hod, for the mind and its strategies, an intellectual approach might make you feel in control, but the way ahead is to follow your instincts. Timing is important now, so trust yourself that you will know the right time to move on, without self-pressure. An additional meaning of the card is being abandoned, leaving you confused as others move on from you—with undignified haste.