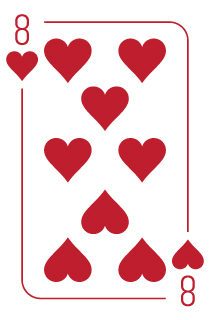 How To Read The 8 of Hearts:

Traditionally the 8 of Hearts is a card of celebration and good tidings. The combination of the Suit of Hearts and the number 8 brings emotional balance, harmony and fair play.

The 8 of Hearts is a card of pleasure and happy times. It indicates sharing good times with friends and family. It represents mutual love and respect, mutual faith and trust, and emotional fulfillment.

The 8♥ can tell you if the object of your affections is feeling the same way about you.  In a business spread, the 8♥ can indicate a fair deal or a mutually beneficial venture. The 8♥ can also represent an existing relationship, or a specific loved one in the querent’s life.

The 8♥ can also represent a couple when referred to as a unit.

Two 8s: Pleasure, having a good time.  Can indicate “music” from the symbolism of 88 keys on a piano.

Four 8s: Weighing the pros and cons of a situation.

Face Card +  8♥ = someone involved in an existing relationship.