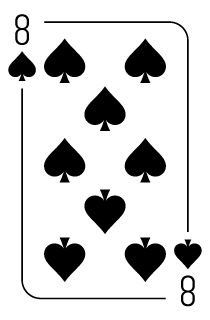 How to Read the 8 of Spades:

Traditionally the 8 of Spades is a card of disappointment, illness and restriction.

The number 8 symbolizes harmony and balance, but when influenced by the Suit of Spades, it denotes a loss of balance, and a lack of reciprocation.  The 8 of Spades refers to any situation that is out of balance. It may indicate an imbalance in the body, which can manifest as an illness.  It can denote unrequited or unreciprocated love, or a one-sided relationship that is not mutually beneficial.

Specifically, the 8 of Spades specifically can point to an imbalance in one’s physical or mental health, and may denote a visit to the doctor, dentist or psychiatrist.  Whereas the 4♠ denotes an illness or injury, the 8♠ indicates the need for medical attention.

My grandmother called the 8♠ “La Spina,” which means “The Thorn” in Italian.  This card can refer to a “thorn in one’s side,” or any problem or painful experience that wounds or causes pain.  Specifically, 8♠ refers to a disappointment, an insult, a slight, a snub, hurt feelings, or an emotional upset.

The 8♠ can indicate a need for careful consideration. It can denote assessing one’s position, or reassessing one’s goals.  It can refer to examining one’s accomplishments, or investigating something totally new.  It can specifically refer to an examination such as a medical exam, civil service exam, scholastic exam, forensic exam, a police investigation, etc.

From an older cartomancy meaning of a prison, the 8♠ can indicate feeling trapped, restricted, undermined, or held back.

2 Eights: Pleasure, having a good time.  Can indicate “music” from the symbolism of 88 keys on a piano.

3 Eights: Major change or a shift in power.

4 Eights: Weighing the pros and cons of a situation