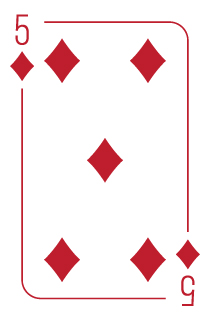 How to Read the 5 of Diamonds:

The 5♦ is a card of physical and mental attraction.  It represents the thoughts that create one’s life experiences.  The surrounding cards will determine whether these thoughts are positive or negative, and will describe the influences attracted into one’s life experiences.  From the energy of the Suit of Diamonds, and the symbolism of the body from the number 5, the 5♦ can denote a magnetic personality, or animal magnetism.

An older symbolic meaning of the 5♦ was landholdings, which was how a person’s worth was measured in medieval times. The more modern meaning for this card is one’s general environment or “personal space.”  The cards surrounding the 5♦ will describe how one’s personal space is being influenced.  This card can also represent “city life,” or civil service.

Two 5‘s – The hands or feet.  Can indicate that something is within reach, or the power is in one’s own grasp.

Three 5‘s – Serving the public. Giving of one’s self freely.

Suggested Card Combinations with the 5 of Diamonds:

Face Card + 5♦ =a person with a magnetic personality, or someone attracted to the seeker with a heart.

5♦ + Face Card = a person the seeker is attracted to. If the Face Card is a heart, the attraction is romantic.