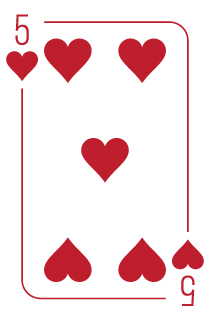 Traditionally the 5 of Hearts is a card of restless love. It can denote positive changes, pleasure and enjoyment, unless surrounded by unfavorable cards.

My grandmother called the 5♥ “Donzella,” which in Italian means damsel, or young unmarried woman.  This card can  refer to an unmarried, female loved one in the seeker’s life such as a girlfriend, sister, daughter, etc.

From an older symbolic meaning of a woman’s thoughts, the 5♥ represents the female gender, the “feminine side,” and all things female. This card can denote anything associated with the female gender such as frilly undergarments, makeup, dresses, skirts, panty hose, etc.   The 5♥ can also denote sewing, knitting and embroidery, and it can represent clothing in general.

The 5♥ card can also denote female sexuality,  intimacy, tenderness, sympathy, compassion, and physical displays of affection.  The 5♥ represents the right hand or right handedness.  From this also comes other meanings such as being right or doing the right thing-being truthful, fair and just.

the 5♥ also represents a desired opportunity, offer or proposal that brings happiness and success.  It could be a marriage proposal, the offer of a dream job, or any chance or opportunity to fulfill a dream, or satisfy one’s desires.

In questions about the gender of an unborn child, the 5♥ would indicate a female.

Two 5‘s – The hands or feet.  Can indicate that something is within reach, or the power is in one’s own grasp.

Three 5‘s – Serving the public. Giving of one’s self freely.

Suggested Combinations with the 5 of Hearts: