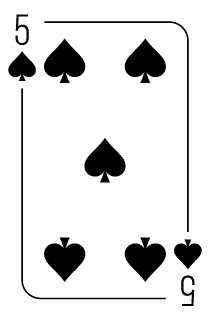 The Number 5 symbolizes active energy, changes, restlessness, communication, the body, and the hands.

Traditionally the 5 of Spades is a card of anger and loss. From an older symbolic meaning of a hand holding a knife, the 5 of Spades can denote cutting someone or something out of one’s life.  It can also denote a surgical procedure.

Specifically, the 5♠ can denote divorce, breaking old ties, or going it alone.  It can indicate quitting one’s job, ending a marriage, or dropping out of school depending on the surrounding cards.  The separation may be voluntary or not, but it is almost always accompanied by pain, grief, sorrow and tears.

The 5♠ and the 6♠ are similar in that they both denote a break of some sort. The difference is that with the 5♠ there are upset emotions, and tears regarding the break up. The 6♠ denotes a clean break with very little or no pain. For example, a woman who is distraught over her recent divorce will usually pull the 5♠, whereas a woman who is happy to be free would more likely pull the 6♠ to represent her divorce.

My grandmother called the 5♠ “Védova,” which means “widow” in Italian.  This card  represents the negative emotions associated with he loss of loved one, or the untimely end of a situation or relationship,  such as anger, depression, loneliness, fears, tears, resentments and hurt feelings.

The 5♠ represents the left hand and left handedness.

Two 5′s – The hands or feet.  Can indicate that something is within reach, or the power is in one’s own grasp.

Three 5′s – Serving the public. Giving of one’s self freely.

Suggested Card Combinations with the 5 of Spades: