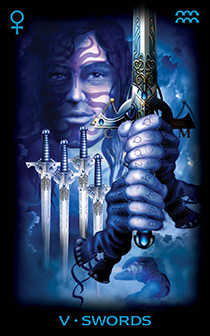 Upright Meaning: The traditional meaning of this Five of Swords is battle and loss. It often shows family disputes, conflicts with managers, and also being the victim of “the system”—specifically, educational boards and government and educational bodies. In relationships, the card predicts tension and conflict. Overall, the Five of Swords reveals ongoing stress, continual challenges to your position—and, often, defeat.

However this disruptive Five of Swords manifests for you, the overriding message is that all is not lost. You may not win the battle, but you can recover and walk away with your self-respect—provided you make a gracious exit at the right time. There’s a danger here that you continue the fight even when the battle is over. Regardless of the provocation, deal with your anger and disappointment. There’s a saying, “It’s all over, bar the shouting.” Don’t keep shouting too much longer or hope to revisit the situation or relationship. It’s done.

Reversed Meaning: The Five of Swords reversed shows unnecessary conflict; you could become caught in the middle of another person’s fight, and you may be the injured party through no fault of your own. This battle is not for good reason. Whoever initiates it has a selfish agenda; this person may be trying to cover up his or her incompetence at work, blaming others to deflect attention; equally, the drama may be due to ego and a need to make a show of power. In this sense, it can be easier to extricate yourself because you know the battle is less personal.

An additional meaning of the card is bullying and oppression. There is no shame in this—rather, the card suggests finding an opportunity to expose the unfairness and to shift the balance of power.