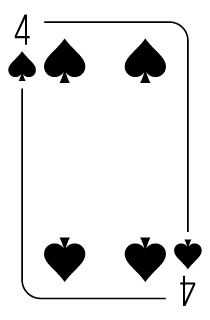 How to Read the 4 of Spades:

Traditionally the 4 of Spades represents illness, recuperation, and the need for caution.  From the stability and squareness of the number 4, the 4 of spades symbolizes the 4 legs and 4 posts of the sick bed.  Symbolically the 4 of Spades can also represent a hospital room, a jail cell, or a coffin.

The 4♠ can represent a physical illness, and all the feelings and experiences associated with sickness such as rest, confinement, recuperation, exhaustion, taking it easy, moving at a slower pace, being bed-ridden, feeling cooped up or fenced in, staying home,  etc.

The 4♠ can also represent anything that is in a poor state of health, or that is progressing too slowly.  With diamonds, this card can indicate a unhealthy money situation, with hearts it can denote lovesickness, with clubs “business is slow,” etc.

The 4♠ canindicate feelings of disgust.  The seeker is fed up or “sick and tired” of someone or something.

Three 4′s: Fours indicate square things such as tables and rooms, etc. Three 4s can indicate places of amusement such as a restaurant or theater.