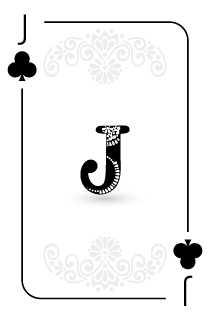 The Jack: A young person of either sex. A man of any age who is young at heart. A child.  Although Jacks can represent young people of either sex, the Jack of Clubs is most often read as a young male.

How to Read the Jack of Clubs:

The Jack of Clubs is a busy, active young person. He is clever and enterprising. He enjoys sports, and may participate in school or community baseball, football, etc. This is also the card of “the student,” and can represent a school boy, or a young man in high school or college.

My grandmother called the J♣ “Domestico” which means “man servant” in Italian. This card did not necessarily refer to a servant or butler (although it could), but to a young man who is of service to-or in the service of the person being read.  He may represent someone who uses flattery to persuade, or just to make others feel good.

The J♣ can represent an employee, and often denotes a young acquaintance from work. Or he could be a close friend or business associate who is going to be useful to the inquirer in some way.  The J♣ may wear a uniform, such as a school uniform, or the uniform could symbolize his work. Card Combinations & Multiples:

King + Jack:  Someone from the past is returning. With the J♣ it could be an old work associate, or friend from high school or college.

Two Jacks:  Legal action, contracts, or a court case pending.  Can indicate a disagreement or quarrel with Spades.