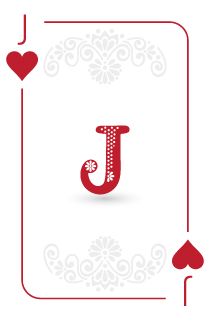 The Jack: A young person of either sex. A man of any age who is young at heart. A child.

How to read the Jack of Hearts:

Traditionally the Jack of Hearts is a card of romance.   In some of the older cartomancy meanings he represents a lazy, immature, emotionally insecure young man; or simply the thoughts of the Queen or King of Hearts. Although Jacks can represent young people of either sex, the Jack of Hearts is most often read as a young male.

The Jack of Hearts is a young person of either sex with whom the querent feels an emotional bond or attachment. This card can represent a child of either sex, a male family member such as a son or son-in-law, brother, cousin, etc. The Jack of Hearts can also indicate a boyfriend, a male lover, or close male friend.

The J♥ can be an actor or an artist.  He can be a writer of poetry, or just a student of the arts.

My grandmother called the J♥ “Giovin Biond,” which translates literally into English as “Blond Youth.” But the title also carries the connotation of “golden child” or “fair-haired young man” which generally indicates someone favored- “who can do no wrong.” Many Italian women feel this way about their brothers, lovers and sons, so this interpretation is very similar to the more modern meanings for the J♥.

The Jack of Hearts is almost always a young person with an emotional attachment to the querent.