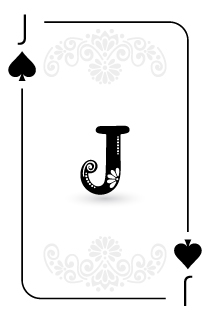 The Jack of Spades is a skillful, clever young man. In some of the older cartomancy meanings herepresents an unsettled, erratic, emotionally inconsistent young man; or simply the thoughts of the Queen or King of Spades. Although Jacks can represent young people of either sex, the Jack of Spades is most often read as a young male.

In coloring, the Suit of Spades is considered the darkest of the deck, and represents people with dark brown to black hair, and dark brown eyes.

The Jack of Spades is a complex, interesting fellow. All Jacks are read as young people; most often “young men,” but they can represent a young person of either sex. Of all the Jacks, the JS is the most diverse in terms of the traditional meanings associated with him.

For example the JS can be:

Of course the meaning you choose for this card will depend on the surrounding cards as well as a good dose of your own intuition.

Some combinations with the JS:

JH/JS: The querent’s son or brother or boyfriend is in the military or is a rookie police officer.