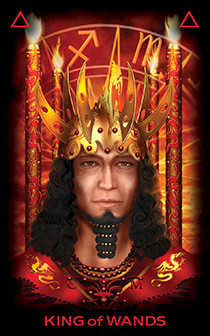 Element: Air of the suit of Fire

The King of Wands in Tarot stands for being creative, inspiring, forceful, charismatic, and bold. His personality is a combination of the positive fire energy of the Wands suit and the outward focus of a King. He is enthusiastic and creative, and he allows his originality and inspiration to take form. If an opportunity presents itself, he takes the lead. The King of Wands is forceful when pursuing his goals, and others follow. Unless it suits his purpose, the King of Wands is never a passive observer. He jumps in to create results. Never the one to be quiet, he is dramatic and exciting and often the center of attraction. The King is bold and daring, and he has the energy and self-assurance to take risks. He believes in himself, has the courage of his convictions, and often avoids safe and easy routes.

As a person: This King of Wands is a man of the world, and it’s likely that he has traveled widely, experiencing many cultures and countries. Talkative and energetic, his ideal vocations include business and management, communications and marketing, the travel industry, acting, and other roles that depend on self-motivation and individuality. He may be self-employed, running a business or acting as a freelance consultant.

His has wisdom, very high standards that he applies to himself and those around him, and strong integrity. Courteous and considerate, he stays true to his values and acts according to his moral code. He is open and self-aware and does not judge other people on their backgrounds or beliefs; he often learns by listening to people talk about their experiences. As a free spirit, he respects others who don’t conform. As a potential partner, he is passionate and communicative.

As an influence: This is the right time to express your ideas and be the individual you are. Summon your entrepreneurial spirit, make a plan, and what you propose will be well received. The practical support you need will be there, but you need to be the initiator. What you do now reflects your truth. Don’t let perfectionism get in the way of your creativity—what you do is more than good enough.

Reversed Meaning: This card reversed indicates a time of restriction when you can’t get others to see your point of view. Equally, check that you’re not going against your intuition if you feel you’re not following the right path—drop the self-pressure and be open to alternative routes.

Bullying, selfish, and opinionated, the reversed King as a person is narrow-minded and obsessive about rules. He can be an overbearing manager or a strict parental figure. He does not want to listen to anyone who doesn’t agree with him, and full of self-interest, he is determined to get his own way.