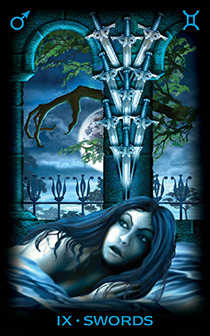 Upright Meaning: I call this Nine “the 3 a.m. card” because it describes the meaning so accurately: It’s what you wake up worrying about in the small hours of the night, showing you are dealing with high levels of anxiety. You may have suffered an illness and the resulting low energy or a shock or a buildup of minor stresses that begin to disrupt your sleep patterns and peace of mind. External events such as these may have triggered the initial stress, but the issue now is how you are responding to it.

Look to the surrounding cards to see the life area that this relates to, although the anxiety in the Nine of Swords can reflect unhappiness in key areas, from work to relationships, coloring your usually positive attitude. The card also indicates the habit of worry—so you may be worrying about inconsequential things that usually don’t warrant your attention. Thankfully, as this is a minor card, this pattern is temporary.

In work, the Nine of Swords can show feeling overwhelmed. You simply have too much to do, particularly if the card appears with the Ten of Wands, known as the burden card.

The Nine of Swards occasionally comes up in a reading to show mental health issues associated with anxiety, such as panic disorder or anxiety and depression. Insomnia and nightmares are additional interpretations.

Reversed Meaning: Unfortunately, as you might expect, the reversed Nine’s meaning is more extreme than that of its upright counterpart and traditionally means despair, guilt, or feeling trapped. However, this is the lowest point of the cycle, and these feeling will begin to shift. As you gradually move out of this difficult phase, you will feel more able to turn these feelings of powerlessness around. Be patient and compassionate with yourself and turn to others for support rather than suffering alone.