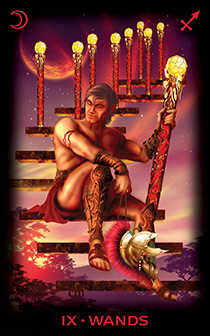 Upright Meaning: The upright Nine of Wands shows that you are in a very strong position. You have fought long and hard to get where you are, and have endured heavy challenges, particularly in work. Being constantly vigilant and ingenious can be exhausting, however, so use your energy wisely; plan all activities meticulously and don’t overexert yourself, and you will have all the resources you need to see you through. Thankfully, as with all minor arcana cards, this influence will not last forever. You won’t always need to defend yourself to this degree, or make so many sacrifices.

This card also highlights the fine balance between being adequately defended and being defensive. While it’s appropriate to establish and protect your boundaries, defensiveness keeps you in a negative mind-set; the Nine often comes up in a reading to show a person who is fearful that his or her idea or other work will be stolen—but this is just a perception rather than reality. It can also show an unwillingness to hand in an assignment or to make your work public in some other way due to fear of rejection or criticism. If so, it’s time to let go—you have worked hard, and your efforts will meet with appreciation and support.

Reversed Meaning: When the Nine of Wands is reversed, you endure strong opposition, which seems unfair. You put in hard work—but receive little thanks in return. You give your all, but it still doesn’t seem to be enough, so you may be at the mercy of an unreasonable boss or demanding children, friends, or clients. This situation is demotivating, so you become fixed on getting through tasks without enjoying the aspects of your work that used to be satisfying. Equally, you could be the one who is obstinate and inflexible in your attitude.

The reversed card can also show issues with boundaries. Someone may be invading your territory. In relationships, you may be dealing with an individual who is acting defensively because you are veering into uncomfortable territory for them.