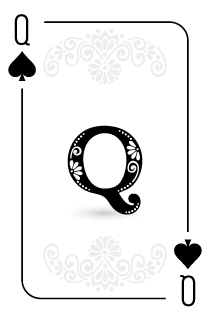 The Queen: A woman over 18 years of age.

How to Read the Queen of Spades:

Traditionally, the Queen of Spades represents an ambitious, skillful, intelligent woman.  In the reversed position, or surrounded by unfavorable cards, she becomes clever, conniving and plotting.

The court cards of the Suit of Spades are perhaps the most symbolic of the deck.  The cards surrounding the Queen will offer clues as to which meanings apply.

The Queen of Spades  can represent:

When surrounded by other Spades, the Queen of  Spades can be:

Queen + Jack:  an old female friend or girlfriend is returning to the seeker’s life.  With the Q♠ she could be an old rival returning.

Three Queens: a group of female friends, a night out with the girls.