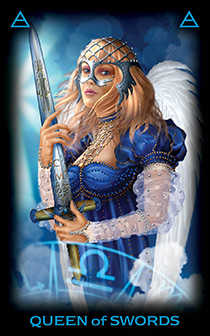 Element: Water of the suit of Air

The Queen of Swords in Tarot stands for honesty, astuteness, forthrightness, wittiness, and experience. Her personality is a combination of the positive air energy of the Swords suit and the inward focus of a Queen. The Queen of Swords admires honesty, is committed to truth, and tells you exactly as it is. She has no interest in lies or tricks and has a marked lack of pretense. She fully understands the good and the bad of the world and is not easy to fool. She can easily analyze a situation, and she can identify a tricky one coming at her. Her observations are straightforward and candid and not meant to be hurtful. Another of the traits of the Queen of Swords is a sense of humor along with witty comebacks.

As a person: An astute strategist, the Queen of Swords is single-minded and highly ambitious. Like her sign of Libra, she can quickly assess all aspects of a situation to get to the truth, including the underlying psychological motivation for others’ attitudes and actions. Adept at numbers, she may be an administrator, IT specialist, researcher, or financial executive—the need for attention to detail relates to her associated sign of Virgo. Sword Queens also make successful businesswomen or bosses. She has much life experience and may have had hurdles to overcome in her early years. This makes her the strong woman she is. For all this, she is still willing to take risks on new experiences and relationships. She does not suffer fools gladly, but if she likes you, she will reward and trust you implicitly.

Traditionally, this card is known as the widow, but means in general a single woman or a woman who has to make her own way in the world. It’s also a common card for single parents.

As an influence: The Queen of Swords offers wisdom and intelligence, perspective, and the ability to see the bigger picture. When placed closed to negative cards in a reading, the Queen shows strength in adversity.

Reversed Meaning: Reversed, the Queen of Swords suggests excuses for bad behavior or a situation in which you are unjustly attacked. As a person, this individual can be an opponent or someone who has suddenly turned bitter and vengeful. However, a common reason for the Queen to invert can be extreme stress—this woman lacks awareness of just how unreasonable her demands have become. If this is the case, back away; she must help herself.