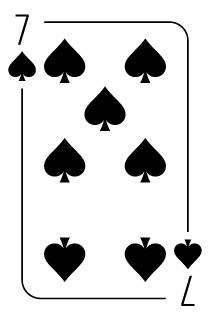 How to Read the 7 of Spades:

Traditionally the 7 of Spades is a card of loss. The negativity of the Suit of Spades draws out the more negative aspects of the number 7 symbolism.  Specifically, the 7 of Spades represents the emotional response to the loss of something prized or someone loved. It can indicate a serious setback in reaching an important goal. It can indicate the loss of a friend or loved one, or the reversal of cherished plans. The 7 of Spades represents the frustration we feel when a project or a relationship is not moving in the direction we had hoped.

The 7♠ is also the water and drinking card.  In his book, It’s Written in the Cards, Dr. Martello says it can even represent water pipes, sinks and the bath. According to Dr. Martello, the 7♠ can also mean having a drink, and represents alcohol, a bar, a nightclub, or even a saloon!

In The Card Reader’s Handbook, Regina Russell adds drugs and addiction to the meanings of the 7♠, which makes sense.  Although alcohol abuse may have been just as prevalent in Dr. Martello’s day, drug abuse is probably much more prevalent today.

My grandmother called the 7♠ Sfortuna which means “bad luck”, or “misfortune.” She read this card in the traditional way as loss, setbacks, frustration and unhappiness.  But there was also the added idea of “the unexpected,” such as with an accident, mishap, or other nasty surprise. The misfortune of the 7♠ was usually something you never saw coming.

Two 7s: signify life changes. With the 7 of Spades it can be a change for the worse. Two red 7s indicate health and happiness.

Face Card + 7♠ = someone who frustrated, who may be indulging in drink or drugs.