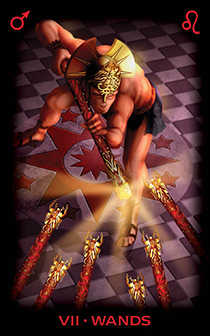 Upright Meaning: The Seven of Wands reveals obstacles in your path, but you will keep going and overcome them. Success is in reach. The card is particularly relevant to work and career matters and highlights all negotiations; regardless of how difficult the conversation becomes, there’s a need to keep talking and stay in conversation until you are satisfied with the outcome. You will need to stand tall, and by being very clear on your position, you can win.

There’s a noble aspect, too, about this card, and it often comes up in a reading to show you may be defending others, not just your own interests. In this sense, the Seven of Wands is the card of the advocate, and you may find you need to stand up for those who are not able to speak for themselves. Morality is important to you now, so the Seven of Wands shows you may become the spokesperson for a group—such as a committee or jury. The task isn’t an easy one, but you will persist.

In relationships, there are hurdles, and you may need to fight for love. This can be only temporary, however, so by all means stand up for your relationship in the short-term, provided you are sure your partner will return your loyalty.

Reversed Meaning: When reversed, the Seven of Wands can indicate that you doubt your purpose. You may struggle to be heard and may have to overcome constant obstacles—but now it’s unclear if it’s all going to be worthwhile. As a result, the card can show anxiety and hesitation. An additional meaning is feeling overwhelmed with continual problems, particularly if this Seven appears with the “burden” card, the Ten of Wands. If so, the message here is to focus on the areas where you can still make a difference, while accepting the things you cannot change. This applies to relationships, too, so ask which imperfections you can live with and which aspects—such as your partner’s attitude or circumstances—are nonnegotiable.