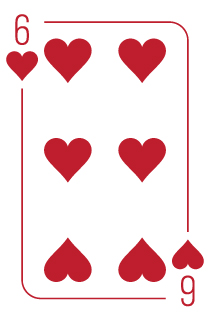 Traditionally the 6 of Hearts is a card of happiness and enduring love. It can denote a positive, happy environment unless surrounded by unfavorable cards.

My grandmother called the 6♥ “Il Scapolo,” which means “bachelor” or “single guy” in Italian.  This card represents the male gender, the “masculine side,” and all things male.  The 6♥ can  refer to an unmarried, male loved one in the seeker’s life such as a boyfriend, male friend, brother, son, etc.

The 6♥ can also  represent anything generally associated with the male gender such as a necktie, cufflinks, boutonnière, toolbox, beard or moustache, as well as items that are unisex today, but were considered manly in olden times, such as pants, razors, etc.

Il Scapolo denotes the potential for an attachment, and the 6♥ can represents an emotional connection, and may indicate a romantic relationship or a love affair.  This card can also indicate feeling emotionally safe, and protected  It denotes a sense of emotional security, gallantry, courage, faith, trust, sympathy, sincerity, and compassion.

In questions about the gender of an unborn child, the 6♥ would indicate a male.

Card Combinations with the 6 of Hearts:

Two 6′s – Things coming together or  falling into place.

Four 6′s – Tying up loose ends, closing the book on someone or something.