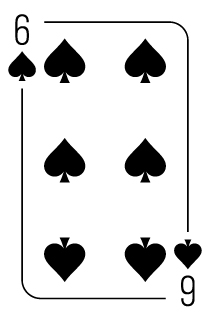 How to Read the 6 of Spades:

Traditionally the 6 of Spades is a card of completion, and it represents the end of one phase and the beginning of a new one.  The 6 of Spades can indicate endings of a permanent nature, especially when the situation or relationship has run its course, and there is nothing left to learn from the experience.

The 6♠ represents the need to let go.  It can indicate getting rid of something that’s not working, and moving on to something new.  It can indicate breaking up established patterns.  It can denote the dissolution of a business, the breakup of a relationship or partnership, and a parting of ways.

The 5♠ and the 6♠ are similar in that they both denote a break of some sort.  The difference is that with the 5♠ there are upset emotions, and tears regarding the break up.  The 6♠ denotes a clean break with very little or no pain.  For example, a woman who is distraught over her recent divorce will usually pull the 5♠, whereas a woman who is happy to be free would more likely pull the 6♠ to represent her divorce.

Two 6′s – Things coming together or  falling into place.

Four 6′s – Tying up loose ends, closing the book on someone or something.