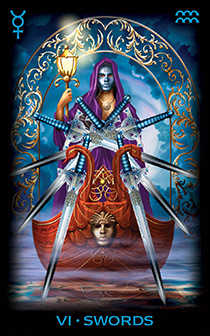 The Six of Swords in Tarot stands for the blues, recovery, and travel. It represents pushing through a rough sea to reach calmer waters.

Upright Meaning: The Six of Swords shows you moving on from a situation or relationship and enjoying a period of peace and harmony. This may manifest mentally rather than physically, as you take a more detached approach, distancing yourself from drama and complication. This gives you an opportunity to rest and recharge; it may lead you to explore a new environment or make a spiritual discovery.

In work, the card can show travel as part of your role (and respite from the office or other workplace), and in relationships, the card commonly shows two people spending time apart. More negatively, the interpretation is a relationship ending (look for accompanying cards such as the Three of Swords or the revised VI, The Lovers, for validation). This ending may be positive or negative, depending on your situation.

On a more literal note, the card can simply show taking a break from work or your usual environment, and you may travel, possibly on a trip overseas. When the Six of Swords appears with major arcana cards VII, The Chariot, for progress and XIII, Death, for transition, a more permanent move is suggested, so the combination can be interpreted as emigration or a long period of travel. If we see the three figures on the card as a family rather than ferryman and passengers, the card suggests a major move for two or more people.

Reversed Meaning: When reversed, the Six of Swords has a meaning that is similar to that of the upright card. It reveals a need to escape, but your plans are delayed. It may not be the right time for you to travel or leave an unsatisfying situation, as certain problems need to be addressed and resolved before you can be free. However, check that your intentions are sound and that you’re looking in the right direction; rather than fixating on a particular outcome, which may blind you to other possibilities, keep your plans realistic. You may feel frustrated now by lack of progress, but stay focused and grounded and your time will come.