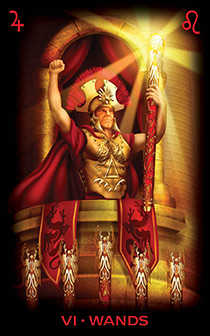 Upright Meaning: This card signifies deserved success. The Six of Wands is a very welcome card if you have been struggling recently and feeling unsure if your hard work will finally pay off. The card often relates to work, career, and projects and can show promotion and a new contract or bid; it can also reveal that an outstanding legal matter will go in your favor. Enjoy this happy time and don’t be afraid to share your accomplishment; others will support and applaud you. It’s time to bask in glory, be self-satisfied, and make space to celebrate, regardless of how busy you may be.

In personal relationships, the card shows that feelings are declared—and will be well received. The card can also indicate a proposal when it appears close to emotion cards such as the Ace of Cups, Two of Cups, Ten of Cups, and the major arcana card VI, The Lovers. This explains the additional meaning of the Six of Wands for celebrations, such weddings or attending parties and degree ceremonies.

A traditional meaning of the card is good news, which can relate to any life aspect—love, property, education and work, and decision-making. Look to the other cards that appear close to the Six of Wands in a reading to determine the nature of the news on the way.

Reversed Meaning: Unfortunately, when the Six of Wands reverses, the reward you have hoped for doesn’t materialize when you need it to. But all is not lost—this is a card of delay rather than cancellation, so hold fast to your goals. The wait for news may be frustrating, but this is due to circumstances beyond your control rather than a reflection on your abilities. The message is to be as patient as you can, and distract yourself with other tasks (rather than check your emails and text messages every five minutes).

The card can also show you being let down by others, which dents your confidence. However, as with all the tarot’s minor arcana cards, this is a passing phase, so try not to take such disappointments to heart.

An additional interpretation is pride, which in the reversed position can reveal an arrogant, self-important individual.