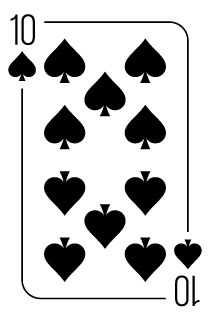 The number 10 symbolizes completion of the current cycle, endings and new beginnings, reaching the pinnacle, and excesses.

The 10 of Spades is traditionally a card of misfortune, grief, ruin, and. tragic endings.  This card casts an ominous shadow across all surrounding cards in the spread.

Specifically the 10 of Spades represents the negative emotions associated with the unfortunate events in life–emotions such as fear, worry, sadness, tears, disappointment, depression and grief.  The 10♠ can indicates that one’s worst fears are about to be realized.  On a more positive note, the 10♠ can reveal the hang-ups and fears that block us from reaching our goals.  The surrounding cards will offer clues on how to work thorough these blockages.

My grandmother called the 10♠ “l’ossessione“ (which means the obsession) because this card can denote compulsive behavior, or an obsession.  The word “ossessione” can also mean nightmare in Italian, and the 10♠ can represent the darker side of life, and the realization of our worst nightmares.  This is the area of secrets, mysteries, lies, suspicions, deception and betrayals.  With cards of love the 10♠ can denote infidelities, or a jealous lover.  With cards of money it can indicate theft, or gambling losses. With career cards the 10♠ denotes “shady deals,” lies and deceit.  And with other spades it can indicate a tragic event.

An older meaning of the 10♠ was “a large body of water.”  From this idea of depth and darkness come the modern meanings of night time, the unconscious, the subconscious and evil forces.  This card also represents winter time and cold weather.

Two 10‘s: Travel out of state or out of the province.

Three 10‘s: Travel out of the country.

9♠ + 10♠ = criminal activity, or being forced to deal with one’s inadequacies.