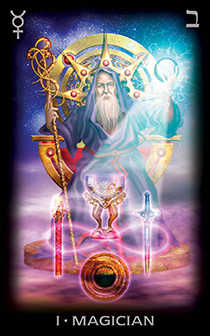 Alternative Names: The Magus, The Juggler, The Mountebank

The Magician card in Tarot symbolizes male power of creation through willpower and desire. The Magician wears red and white clothes. The basic card symbols are the lemniscate (a figure eight on its side symbolizing eternal life and eternity), a small wand, a table displaying a chalice symbolizing knowledge and preservation, a pentacle, staff, and sword.

Upright Meaning: The appearance of The Magician in a reading indicates latent powers, yet to be taken up and brought into manifestation. Also known as The Juggler, this card suggests that everything in the universe is spread out before us, and if we learn to use them correctly we can manifest the results we desire. These are literally the basic materials of creation, and it is the task of The Magician to handle them well, to manipulate and control them for beneficent purposes. This is mental work that affects the material realm.

Thus, The Magician shows us that what we consider to be illusion is another form of reality, and what we consider to be reality can be mere illusion. This is not trickery, but a deep understanding of how we must learn to use our intellects, our intuitive abilities, our personal talents, and our practical skills in order to mediate between the two worlds, both of which affect us simultaneously.

The Magician is a card of power, for just as a mage, or true magician, stands at the center of the universe with the tools and ability to manipulate it for his purposes, so does each of us create, or re-create, our own universes within ourselves, first in our minds, and then in our manifest realities. This card tells us that our nature is one with the nature of the universe. It suggests that we have the ability to control our own lives, that we can manipulate people, things, and events—so long as we go about it the right way and for the right ends.

This card is primarily about self-development; as Tarot Arcanum One, it is the beginning of the road to spiritual enlightenment, the starting point. It does not say that we are already able to control our universes, but that we must learn what mode to use in order to gain our ends and reach our goals, whether they are spiritual or mundane.

Reversed Meaning: When the good Magician is reversed, he turns trickster, so this card can show you being mislead by a charming manipulator. What you see is not what you get, and it’s all show, not truth. In your projects, the Magician reversed can show a creative block as you feel torn between two paths or choices that get in the way of progress. It’s time to choose one option and commit to it fully. The reversed card can also reveal delays to travel plans and miscommunication in general.