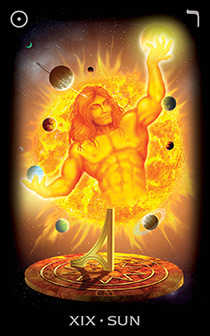 The Sun card in Tarot radiates positive energy. This is one of the most optimistic cards, indicating enthusiasm and joie de vivre.

Upright Meaning: When The Sun card appears, it is an indication that your past work is now bearing fruit, a concept that is symbolized by the child or children. Along with The Moon, it implies the union between the unconscious realm of creativity (Moon) and the conscious realm of manifestation (Sun). Whether the birth represented is a biological child or a creative project, the outcome is a happy one. It is a time when good things come into your life—success, optimism, achievement, health, general good fortune, and happiness.

When The Sun turns up, it brightens any negative cards in the spread—no matter where The Sun appears in the spread. His influence is always beneficial, suggesting prosperity, enthusiasm, honors, public recognition, and attainment. You are happy to be alive because you feel it is the dawning of a new day. Any special efforts or ventures, such as taking a test or making a presentation, will turn out favorably.

In the wake of the demise of the great Mother Goddess as the sole divinity, the Sun, which represents the masculine principle, came to be worshipped as the central deity in many cultures. The ancient Egyptians, after eons of a pantheon of goddesses and gods, under the leadership of the pharaoh Akhenaten, were persuaded, albeit reluctantly, to accept a single god—known as Ra, Amun-Ra, or Aten (all of which were names for the Sun)—which Akhenaten believed was the god of all gods. The Greeks called their Sun god Helios, whom the Romans named Apollo.

Reversed Meaning: It’s virtually impossible to see any negative side to the sun, even when reversed. The only glitch could be a delay to travel plans, but you will enjoy a happy and content period regardless.