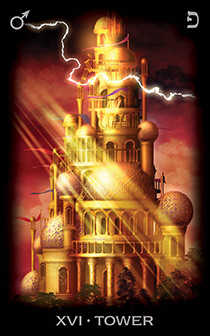 Alternative Names: The House of God, Fate, The Lightning

The Tower card in Tarot is all about the downfall of old ideas. A structure has suddenly and violently come crashing down, leading to chaos and distress, but it has also made room for something new to be built. The basic symbols of this card are a tower on a rocky outcrop, a bolt of lightning, a couple of figures falling from the tower, and waves crashing below.

Upright Meaning: ​Like the Death card and The Devil, The Tower tends to strike alarm and fear into anyone in whose reading it appears, and indeed many writers assign a fully negative meaning to this card. The Tower does not necessarily represent ruin and devastation, although its appearance usually does herald swift and dramatic change—sometimes shocking and extremely upsetting change.

It is important to keep in mind that the querent has usually brought the situation on herself by ignoring or denying that something is rotten and needs restructuring or deconstructing. Most likely, the querent is already well aware of a pressing need to make changes, but he or she is steadfastly refusing to take action. Then along comes a circumstance, such as losing a job or getting a divorce, having an accident or a financial setback, that forces the person to face reality.

The message of The Tower is that you must destroy the old structures before they destroy you, so you can become free. Otherwise, they may be shattered by seemingly outside influences (which you have actually created yourself). In the wake of the chaos, a new order will grow. What was unsound will come tumbling down. You can pick and choose among the rubble to decide what is worth saving, and from that, rebuild your life in accordance with who you truly are.

Reversed Meaning: When the Tower is reversed, you may find yourself taking responsibility even when you are blameless. It can also show you have held on to a career, project, or relationship that is not strong enough to stand the test of time. If you have clung to the past to protect yourself from reality, your fears may materialize. The Tower’s collapse is inevitable, so do not feel responsible for forces outside your control. Its impact is sudden and dramatic, and soon you will know exactly where you stand.