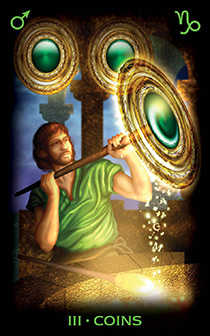 The Three of Coins in Tarot stands for teamwork, planning, and competence. The Three of Coins meaning in a Tarot reading is about overcoming the impossible. This card is one of three cards in the Tarot deck that focus on the group, the others being the Three of Cups and the Hierophant of the Major Arcana.

Upright Meaning: The upright meaning of the Three of Pentacles is rewarding work. It often shows you are ready to let your talents shine in public, and the card often appears in readings to show launching a business, receiving a commission, giving a lecture or teaching, or presiding over an important event; specifically, it can also show making a speech at a graduation or wedding, for example.

In domestic affairs, the card can predict building or improvement work to your home or putting a property up for sale. The Three of Pentacles is also a good card for creatives, predicting that projects will be finished and appreciated. The work may also be displayed in a public space.

According to tarot scholar Jonathan Dee, the Three of Pentacles is sometimes called the Architect, which means you establish a lasting enterprise, a project that “causes you to stand head and shoulders above both friends and enemies alike.” The downside, of course, as you succeed and become visibly successful, is the touch of envy you may sense around you; it may feel uncomfortable, as you’re not used to negative attention. This jealousy, as with elements of all minor arcana cards, is transitory and will not dint your confidence or harm your progress. Detractors can only make you stronger.

Reversed Meaning: When the Three of Pentacles reverses, work is tiresome and you may not be willing to put in the groundwork—or indeed to work at all. This may be because you feel you’ve seen it all before and have become cynical about finding a career that will suit, or you take on a role for the perceived glamor—or the way it is sold to you—and later realize that the work is mostly tedium. You’ll need to push through the dull details or make a swift decision to move on.

Another interpretation of the card is poor planning so a project doesn’t succeed. In property affairs, it can show builders who do not finish the work they begin.