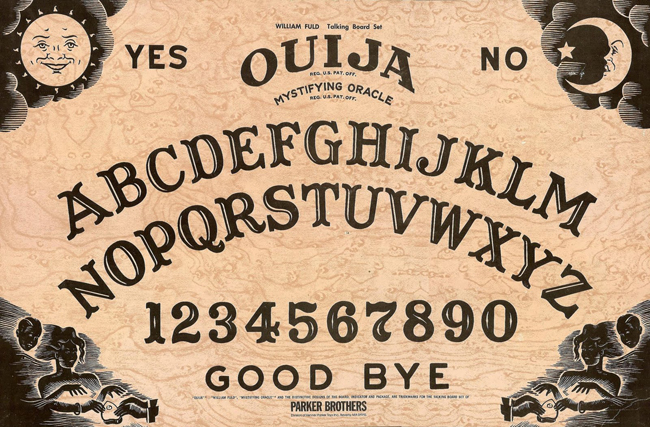 (From Wikipedia, the free encyclopedia)

The Ouija board also known as a spirit board or talking board, is a flat board marked with the letters of the alphabet, the numbers 0-9, the words “yes”, “no”, “hello” (occasionally), and “goodbye”, along with various symbols and graphics. It is a registered trademark of Hasbro Inc.,which markets and distributes the Ouija Board as part of its line of board games. It uses a planchette (small heart-shaped piece of wood) or movable indicator to indicate the spirit’s message by spelling it out on the board during a séance. Participants place their fingers on the planchette and it is moved about the board to spell out words. It has become a trademark that is often used generically to refer to any talking board.

Following its commercial introduction by businessman Elijah Bond on July 1, 1890,the Ouija board was regarded as a harmless parlor game unrelated to the occult until American Spiritualist Pearl Curran popularized its use as a divining tool during World War I.

Mainstream religions and some occultists have associated use of the Ouija board with the threat of demonic possession and some have cautioned their followers not to use Ouija boards.

While Ouija believers feel the paranormal or supernatural is responsible for Ouija’s action, it is parsimoniously explained by unconscious movements of those controlling the pointer, a psychophysiological phenomenon known as the ideomotor effect. Despite being repeatedly debunked by the efforts of the scientific community and denounced as a tool of Satan by conservative Christians, Ouija remains popular among many people.

One of the first mentions of the automatic writing method using in the Ouija board is found in China around 1100 AD, in historical documents of the Song Dynasty. The method was known as fuji 扶乩 “planchette writing”. The use of planchette writing as a means of ostensibly contacting the dead and the spirit-world continued, and, albeit under special rituals and supervisions, was a central practice of the Quanzhen School, until it was forbidden by the Qing Dynasty.Several entire scriptures of the Daozang are supposedly works of automatic planchette writing. Similar methods of mediumistic spirit writing have been widely practiced in ancient India, Greece, Rome, and medieval Europe.

During the late 19th century, planchettes were widely sold as a novelty. The businessmen Elijah Bond and Charles Kennard had the idea to patent a planchette sold with a board on which the alphabet was printed. The patentees filed on May 28, 1890 for patent protection and thus had invented the first Ouija board. Issue date on the patent was February 10, 1891. They received U.S. Patent 446,054. Bond was an attorney and was an inventor of other objects in addition to this device. An employee of Kennard, William Fuld took over the talking board production and in 1901, he started production of his own boards under the name “Ouija”.Kennard claimed he learned the name “Ouija” from using the board and that it was an ancient Egyptian word meaning “good luck.” When Fuld took over production of the boards, he popularized the more widely accepted etymology, that the name came from a combination of the French and German words for “yes”.The Fuld name would become synonymous with the Ouija board, as Fuld reinvented its history, claiming that he himself had invented it. The strange talk about the boards from Fuld’s competitors flooded the market and all these boards enjoyed a heyday from the 1920s through the 1960s. Fuld sued many companies over the “Ouija” name and concept right up until his death in 1927. In 1966, Fuld’s estate sold the entire business to Parker Brothers, which was sold to Hasbro in 1991, and which continues to hold all trademarks and patents. About ten brands of talking boards are sold today under various names.

Most religious criticism of the Ouija board has come from Christians, primarily evangelicals in the United States. In 2001, Ouija boards were burned in Alamogordo, New Mexico by fundamentalist groups alongside Harry Potter books as “symbols of witchcraft.” Religious criticism has also expressed beliefs that the Ouija board reveals information which should only be on God’s hands, and thus it is a tool of Satan. A spokesperson for Human Life International described the boards as a portal to talk to spirits and called for Hasbro to be prohibited from marketing them.

Bishops in Micronesia called for the boards to be banned and warned congregations that they were talking to demons and devils when using the boards.

Ouija boards have been criticized in the press since their inception; having been variously described as “‘vestigial remains’ of primitive belief-systems” and a con to part fools from their money. Some journalists have described reports of Ouija board findings as ‘half truths’ and have suggested that their inclusion in national newspapers lowers the national discourse overall.

The Ouija phenomenon has been criticized by many scientists as a hoax related to the ideomotor response. Various studies have been produced, recreating the effects of the Ouija board in the lab and showing that, at least under laboratory conditions, the subjects were moving the planchette involuntarily. Detractors have described Ouija board users as ‘operators’. Some critics noted that the messages ostensibly spelled out by spirits were similar to whatever was going through the minds of the subjects.

In the 1970s Ouija board users were also described as “cult members” by sociologists, though this was severely scrutinised in the field.