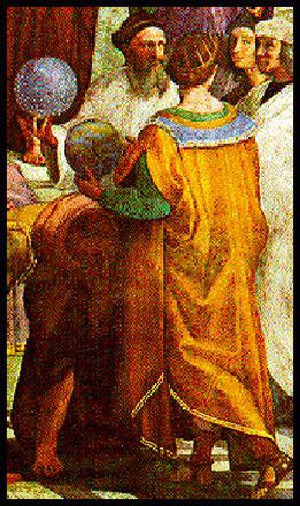 Four Books of the Influence of the Stars 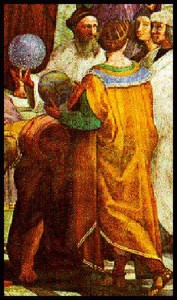 Are you curious about the origins of modern astrology?

The main purpose of this article is to alert readers to the Tetrabiblos, an early astrological encyclopedia by Claudius Ptolemy in the 2nd Century AD.  It’s subtitled in translation, Four Books of the Influence of the Stars.

Tetrabiblos is an ancient astrological text that is the basis for much of the foundations of astrology.   This comes from Wikipedia, “The early 20th-century Humanist astrologer Dane Rudhyar reported that the astrology of his era “originated almost entirely in the work of the Alexandrian astrologer, Claudius Ptolemy.”

Here’s a description of Ptolemy from the NCGR* Study Guide, “Ptolemy (c. 150 AD), one of the greatest scientists of the ancient world and author of the major astrological work, Tetrabilos, divided astrology into two fundamental categories:  universal and genethlialogical.”

Today, the events of the day that affect all are known as mundane.  And the astrology that is focused on an individual’s life is known as natal.

And this comes from the Wikipedia page for Tetrabiblos:  “Ptolemy’s Almagest was an authoritative text on astronomy for more than a thousand years, and the Tetrabiblos, its companion volume, was equally influential in astrology, the study of the effects of astronomical cycles on earthly matters. But whilst the Almagest as an astronomical authority was superseded by acceptance of the heliocentric model of the solar system, the Tetrabiblos remains an important theoretical work for astrology. It is described as “indispensable” for serious students of astrology.”

Ptolemy’s Tetrabiblos was in favor up to the 17th century, when it started to be seen as outdated and based on “superstition.”  Ptolemy’s model of the universe was geocentric, with the Earth at the center.

In the 16th-Century, Copernicus used mathematical calculations to set in the heliocentric model.  The Copernican Revolution was the shift to understanding that the planets revolved around a relatively stationary Sun.

Tetrabiblios (available here free as a PDF download) is a 1822 translation that comes by way of Prof. Peter J. Clark, who teaches a Traditional Astrology Course.  His site is Classical Astrologer.com.

Prof. Clark notes that Ptolemy was an anthologist, having drawn knowledge from “Egypt, Greece, Chaldea, Babylonia and beyond.”

Writes Clark, “More to the point, he was in the enviable position of being in Alexandria during the peak of its eminence.  Alexandria was in intellectual and spiritual foment.  Ptolemy is clearly drawing from a wide range of sources in Tetrabiblos.”

Reading through the Tetrabiblios, there’s a big focus on the actual effects the planets and Zodiac signs were thought to have on weather and the seasonal changes.

For each planet, Ptolemy wrote of its drying or hydrating effect.  Here’s Mercury’s entry:

Mercury in general is found at certain times alike to be drying and absorptive of moisture, because he never is far removed in longitude from the heat of the sun; and again humidifying, because he is next above the sphere of the moon, which is closest to the earth; and to change quickly from one to the other, inspired as it were by the speed of his motion in the neighbourhood of the sun itself.

The basics of astrology are there in outline, though there’s often a different label assigned.  And we have to remember that the archaic language has been translated, on top of coming to us from the distant past.

And yet, we see in Ptolemy’s writings where assignations like exaltation came into being, with Zodiac signs.  Again, it’s to do with dryness and moisture.  On Venus, he writes, “as she is moist by nature and increases her own proper power all the more in Pisces, where the beginning of the moist spring is indicated, has her exaltation in Pisces and her depression in Virgo.”

This will interest most, those who want to ponder the roots of astrology, as we know it today.   Or those interested in practicing classical or traditional astrology.

We see the logic behind the orderings like triplicities and also the labels of benefic and malefic, exalted and in its fall.  Though Ptolemy lived in a different world, so to speak, we see in Tetrabiblos the building blocks of the system still used today.

Top Astrologer of All Time?

And here’s something off beat — a nod to Ptolemy from a couple of years ago, from the ‘net.

Chris Brennan of The Horoscopic Astrology Blog voted Claudius Ptolemy the top astrologer of the last 3,000 years.  And here he mentions the Tetrabiblos.

By far the most towering figure on this list is Claudius Ptolemy, who was a 2nd century polymath who lived in Roman Egypt. Ptolemy wrote influential works on astronomy, geography, music, optics, and astrology.  His goal was to create a unified system that tied together all of the different scientific fields.

His eminence as an astronomer led later generations of astrologers to take his astrological work very seriously, and within a century or two of his death his textbook on astrology, usually known as the Tetrabiblos, became extremely popular.

Ptolemy’s astrological work is interesting from a historical perspective because he appears to have been a bit of a reformer, who was trying to place astrology on a more solid scientific footing by providing it with what he saw as a more consistent theoretical and technical framework.  One of the major technical changes that he was successful in advocating was the adoption of the topical zodiac, while one of the major conceptual changes that he instituted was the viewpoint which held that the planets act as causal agents which bring about what they indicate astrologically, rather than simply acting as signs or omens of future events.  Ptolemy’s naturalistic view of astrology was part of a complete cosmological package that became the dominant worldview for the next 1,000 years.

Ptolemy’s Tetrabiblos is the only astrological text that was continuously transmitted and translated into different languages over the past 1,800 years since he wrote it, and for that reason he is undoubtedly the most famous and most influential astrologer of all time.