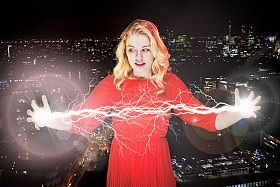 Rise of the Independents

Aries is the first sign of the Zodiac, and the initiator that thrives at the growing edge. This transit is awakening wild, undiluted and forceful energies that awaken the surprising new. The will to initiate rises up from within, and much can be set in motion, though not all ventures will find traction.

Finding traction is not easy when the ground is moving! The other cosmic happening is Pluto Capricorn, with its currents of demolition and rebuilding. Many have experienced sudden, earth shattering changes, lost jobs, homes, marriages and sense of continuity.

Uranus is in retrograde motion until Winter Solstice (Dec. 21s) and Pluto is direct — there’s now an intensifying disturbance in the force, as they move toward an exact square (Dec 15th). It’s the sixth squaring off of Uranus and Pluto (see dates with final square aspect on March 15, 2015).

Editor’s Note: “Ouranous” is the Ancient Greek name for Uranus, the God of the Sky. I asked astrologer extraordinaire Robert Phoenix for his take on Uranus at its half-way point through Aries.

Uranus in Aries has been flirting with it’s mid-point all Summer long, cresting at 16 degrees and backtracking to 13 by years end. Deciphering the outer planets on a personal level is tricky since they carry so much collective import, but it’s clear that Uranus’ electro-magnetic trickle current is zapping us in ways that are both enlightening and disturbing. Having trouble sleeping? Yep, Uranus is plugged into the individual (Aries) circuit, 24/7. I guess we all get to experience Tesla’s notoriously scant sleep cycle.

The retrograde action of Uranus catapults us back to the time when we were children and all things were possible. Thoughts were not limited, constrained or defined by social gravity. Floating in the untethered space of innocence is the pure light of inspiration and genius. Who were you before the world rushed in? What crazy, outside thoughts grabbed your attention in a way that only a child could entertain? With Jupiter (expansion) in Leo (the child) this teleportation through time is amplified.

Uranus doesn’t allow us to censor much. It’s bold, confrontational, inspired and unpredictable. Since Uranus will station at 13 degrees, it also evokes the release of hormones, the rush power and the severing of the psychic umbilicus that the average thirteen-year-old experiences as well, where the scale fall away and the world is viewed in often startling and potentially uncompromising ways.

Thirteen is the bridge between innocence and experience, the nexus between the child and the adult and the gate between possibility and cynicism. This current Uranus/Aries cycle challenges us to ground both potentials and transform them into imagination and creative realization.

Uranus in Aries is the rush and jolt out of fixed notions of what’s possible. If at this time, we find ourselves standing in the ruins of our life, the biggest surprise could be that with it comes a stirring vitality of mind and body. The edge of the new becomes thrilling, and many are answering that call.

Things aren’t the same, and the old rules don’t necessarily apply. In steps Uranus in Aries, to emerge in a new way, to Be and Act differently. One example is the institution of higher learning and the debt it often shackles young people with. Some are wondering, is the future going to have this set-up life, the job that a college degree prepares you for? A phenomenon of Uranus-Pluto, is that there could be more stability in taking the less conventional route, depending on your life aims.

With Uranus in Aries, the break downs around us can actually be freeing for some. Uranus is the current of evolution, and in Aries is in a brand new cycle. It’s time for originality, pioneering innovations, entrepreneurship and boldly living an unbranded, self-sourced life.

Let’s consider that Aries is all about action — it’s the fire sign of pure impulse. And looking around, we see individuals being activated, exactly by the ordeals of change that are touching all of us.

The power of the free thinker unbound by convention is notable in many fields these days. For example, there’s a notable rise in numbers and prominence of the independent researcher. This carries over into the field of journalism, where intrepid independent minds are winning new readers by offering perspective outside the fixed, controlled script.

The value of courageous independent voices is rising. And that’s why I see it as a growth area for making a living, if it’s a calling. Uranus Aries is lighting fires in minds, and as Robert writes, it’s an instigator of uncensored Aries-style plain speaking. There is a real urgent need for inspired visionaries to continue to cut through the distortions and mental malaise of our times.

The surge of igniting from within, that Uranus Aries sparks, is the fuel of animated leaders. And yet, be cautious about taking short-cuts, and wearing the mantle of expert before you’re ready.

The in-your-face wild eyed look of Uranus Aries can be pushy and empty of substance, if it doesn’t meet the standards of the counter force, Pluto in Capricorn. That might mean earning credentials, or to be sure you’re being thorough with the job of dismantling old out-dated programming.

Aries is the one that wants it now, and expects results through sheer force of will. Yes, change happens so fast these days, it makes your head spin.

But stay grounded in reality around you, to find that traction and to be able to direct these lightning bolts to manifestation. Be wary of X Days to Be a Priestess kinds of instant gratification gimmicks. Be the one that seeks true wisdom and character, to anchor all that enthusiasm.