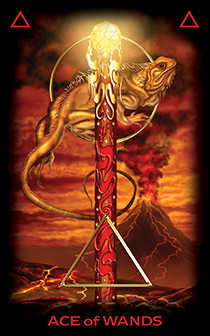 The Ace of Wands in Tarot represents creative force, enthusiasm, and courage. The Ace of Wands meaning in a Tarot reading is one of constructive, confident energy working toward individual power and fulfillment.

Upright Meaning: The upright meaning of the Ace of Wands is auspicious for every aspect of your life. In a spread, it overrules any negative minor arcana cards close by (just like the major arcana card XIX, The Sun). The Ace predicts new beginnings, enterprise, and invention and often relates to work issues and projects. It’s a happy card for creative work, too. With this Ace, you experience a flash of inspiration and know what do next to give form to your concept.
As you conceive ideas, so the card works at a literal level as a phallic symbol, for male virility and starting a family.

An additional meaning of the card is travel and adventure, particularly when it appears in a reading with the Three or Eight of Wands.

Reversed Meaning: When the Ace of Wands reverses, it can show blocks to creative projects and delays to travel. In work, a project may be abandoned or postponed due to poor management. In general, the card reveals false starts; plans need a rethink.

In relationships, this Ace can reveal a lack of commitment from a man or time apart for a couple, usually due to work, and the woman finds herself waiting for the man.

Another common meaning of the reversed Ace of Wands in readings is difficulty conceiving a child, particularly if the card appears close to the Three of Swords, the card for sorrow.