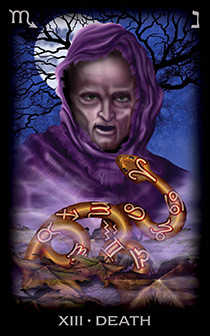 The Death card in Tarot is a card of major transformation and new beginnings, and it probably won’t be easy. The Death card meaning in a Tarot reading is about transformation, passage, and change. The basic symbols of the Death card are Death as a skeleton in black robes or armor. There may also be a scythe or a flag featuring a five-petaled rose. There may be other figures in the field, the most common and recurring is that of a child.

Upright Meaning: The Death card in a reading rarely foreshadows a physical death. What it means is the end, or death, of a cycle. Whenever a stage in one’s life ends, there is a need for mourning. It is only the refusal to accept that something is ending—trying desperately to hold on to what is clearly over—that causes trouble. Employing cosmetic means to stave off the approach of age, for instance, is a useless effort to avoid the inevitable. What gives importance and meaning to this card is the querent’s acceptance of the change that cannot be avoided. Thus, in essence, the ultimate message of the Death card is the promise that new life follows disintegration.

Reversed Meaning: Death reversed has virtually the same meaning as the card in the upright position, but the difference is in your reaction. You may feel anxious and stressed, unable to comprehend what is happening, rather than being accepting. When Death is reversed, the universe is telling you that there is no way back—a relationship cannot be mended, or an employer won’t change their mind. If you do a second reading and ask the question again, this card can appear after you have already had Death upright, as a final confirmation of your question.