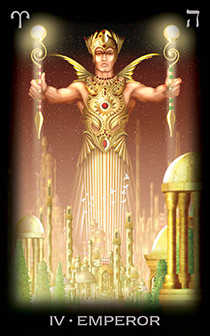 The Emperor card in Tarot symbolizes accomplishment, confidence, wealth, stability, leadership, father/brother/husband, achievement, and a capable person. The basic symbols for this card are the throne, rams’ heads, and sometimes the eagle, orb, and scepter. The Emperor, as Aries (the Ram) is the infant, the first sign of the zodiac. He naturally follows the Empress.

Upright Meaning: When The Emperor appears in a reading, look for issues related to authority. Although The Emperor represents worldly power and wisdom, he is not simply a figure who gives commands to others. His achievement is to understand that peace and security require a willingness and ability to defend it. “The price of freedom is eternal vigilance.”

The Emperor is a teacher figure, and what he teaches is the meaning of power and how to use it in this world. Though not overtly aggressive, he tells us that it is necessary sometimes to take up arms against evil forces. With The Emperor, there is no waffling about what is right and good, no rationalizing that the ends justify the means. As a protective male force, especially of the home and of domestic harmony, he personifies the ideal that what is worth having is worth fighting for.

The Emperor in a reading can also indicate issues concerning one’s biological father, or authority figures in general. He can show that the time has arrived to become the authority figure, rather than depending on others to provide protection. The Emperor often appears when the person is struggling to achieve personal independence, to overcome the inner parent tapes, to become his or her own person. The Emperor says that one must, often late in life, come to terms with what father means in his or her life, and reconcile related issues.

Reversed Meaning: When reversed, the Emperor is power-hungry and excessive in his demands, and represents the negative traits associated with traditional masculinity, such as being domineering, controlling, and even cruel. Greed is another aspect of the Emperor reversed. Whereas the upright Emperor knows his boundaries, the reversed Emperor does not know where to draw the line and may use excessive force or persuasion to get what he wants. This card therefore shows issues with authority figures and other potentially domineering individuals who are run by their egos.