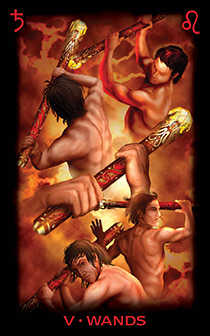 The Five of Wands in Tarot stands for scuffles, strife, challenges, disagreements, competition, and hassles. Nothing seems to be flowing smoothly, and it appears as though everything is against you. It seems nothing is coordinated, everyone is working at cross-purposes, and the ride is going to get bumpier and bumpier. Of course, these are all small and irritating obstacles, and there are no major blocks. Other than hassles and disagreements, the card also stands for competition. In the right circumstances, competition is fine. It generates the encouragement to do one’s best.

Upright Meaning: The traditional meaning of this Five of Wands is competition, and the message is to hold your position, rather than compromise. Unlike the Five of Swords, this card does not predict outright battle, but there will be fiery opinions and a lack of agreement, at least for now. Misunderstandings abound, particularly in work matters. You may find yourself in meetings during which everyone is talking at once, defending their position rather than reaching a consensus; it’s a fight just to be heard.

Scheduling problems and delays to travel plans are an additional meaning, so double-check travel documents and emails, appointments, accounts, and agendas; pay close attention to any written documents.

The Five of Wands often comes up in readings to show being surrounded by people with strong opinions, particularly in families; in education, it predicts that you will need to compete hard in tests or examinations—but you can succeed. On a lighter note, the card can also show competitions that are important to you, such as sporting events.

Reversed Meaning: The reversed meaning of the Five of Wands is deception and misinformation. You may be mislead, so carefully consider the source of messages before you make assumptions; what you hear may be exaggerated or untrue. In its most negative aspect, the card can show dishonesty.

In general, the Five of Wands can show you feeling stressed and in a weak position, and if so, it is better to keep your own counsel just for now, or at least be highly selective about the people you choose to trust.

An additional meaning of the card is litigation.