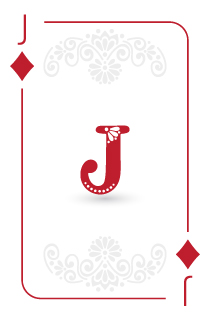 The Jack: A young person of either sex. A man of any age who is young at heart. A child.

How to Read the Jack of Diamonds:

Traditionally, the Jack of Diamonds represents a young person of either sex with very light coloring.  He or she is fair-haired with blue, green or gray eyes. The Jack of Diamonds is intelligent, energetic, cultured and financially secure.

The Jack of Diamonds is usually an intelligent, dynamic young person. There could be money around this person. He or she might be a wealthy young jet-setter, a high school football star, a bank teller, or a petty government official.

My grandmother read the J♦ as a young relative by marriage. He or she might be a step child, step-brother or sister, a brother-in-law or sister-in-law, son-in-law or daughter-in-law, or any family bond by marriage.

In his book How to Tell Fortunes with Cards, Wenzell Brown relates that the J♦ is linked in Gypsy folklore with The Hanged Man of Tarot. According to Brown,

“This is never a card of death, but indicates an individual who is ‘upside down,’ who is suspended between the realities of life and visions and ambitions which he has not been able to clarify. He is inverted, in a condition contrary to that in which most people are found. What he says and does must frequently be interpreted backwards, for he is striving for a wisdom which he has not yet attained.”

King + Jack = Something or someone from the past is returning. With the J♦ it can indicate a long, lost relative.

Two Jacks = A court case that’s pending, or some legal action. If the J♦ falls last a fee may be involved.  With Spade, a disagreement or quarrel.

Three Jacks = Going out with a group of young people.