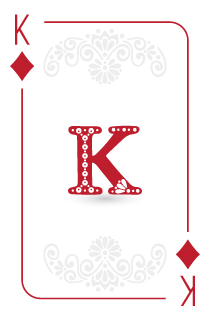 How to Read the King of Diamonds:

Traditionally, the King of Diamonds represents a man with very light coloring –  red or light blond hair with blue, green or gray eyes.  He might also have gray or white hair.  The King of Diamonds is intelligent, energetic, cultured and financially secure.

The King of Diamonds is an intelligent, dynamic man of authority, and there is usually money around him. He might be a wealthy politician, an account executive, real estate broker, a CPA, an investment banker, or government official.  He takes great pride in his professional persona.  If he is not careful, he can become consumed by his work, and neglect the other areas of his life.

My grandmother read the King of Diamonds as a male relative by marriage. He might be a step child, step-brother, father-in-law, brother-in-law, son-in-law, or any family bond by marriage.

King + Jack:  a male friend from the past is returning to the seeker’s life. With the J♥ it could be an old love interest.

3 Kings: success, making a name for oneself.

4 Kings: public recognition, and organization consisting of mostly men such as a men’s club.