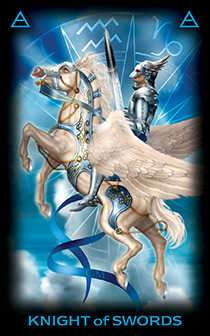 The Knight of Swords in Tarot stands for being direct (blunt), authoritative (overbearing), incisive (cutting), knowledgeable (opinionated), and logical (unfeeling). On the one hand, the Knight of Swords has a keen intellect, speaks clearly with authority, and is a master of logic. On the other, he can be tactless, convinced of his own superiority, and undiplomatic. He can be relied on for his analytical lucidity. Being indifferent to the feelings of others, he does not tolerate stupidity.

As an influence: Unpredictable, tempestuous times are ahead—you’re in for a roller coaster drama of highs and lows. Sudden truths may come to light or underlying conflicts are exposed. This may be illuminating, stressful, or bewildering, depending on your position.
The card often comes up to show disputes at work and tension within families and in romantic relationships. While you may not be responsible for the cause of the trouble, what counts now is how you recover. There is a way forward, but you may need to wait until the situation is calmer before you can make a move.

As a person: The Knight of Swords is determined and driven, and he has a strong sense of himself and his mission. He may be quirky and entertaining with an offbeat sense of humor, and he may even dress in a distinctive way. Incisive, forthright, and intelligent, he makes a strong advocate and is prepared to fight for his beliefs. The downside is that he often makes his mark, gets bored, and moves on. In relationships, he may cause drama, but takes no responsibility for reconciliation, leaving others to make peace while he’s charging ahead with his next obsession. In work, he can show up in readings to represent auditors and other assessors, such as doctors and lawyers, or consultants who are hired to fire, not fix—in short, professionals who are adept at diagnoses and whose opinions matter. Ultimately, though, you are the one who will have to deal with the outcomes.

Reversed Meaning: When reversed, the King of Swords means stressful situations are blown out of proportion as an individual thrives on drama but lacks the courage to take control. The card also advises that you may be let down by someone you thought was reliable and steadfast. A person with a big personality may have lots to say but have little substance. However, this individual’s high intelligence means he usually talks his way out of trouble, denying any involvement.